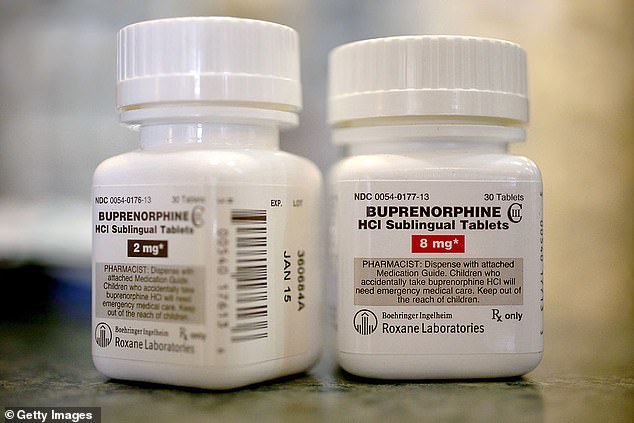 The Centers for Disease Control and Prevention (CDC) is rolling back some restrictions placed on opioid distribution, saying previously put in place guidelines were being misused in ways that hurt patients.

The agency no longer suggests doctors to limit opioid treatment to only three days, is dropping recommendations that patients can only receive 90 mg of morphine daily, and now recommends doctors not to suddenly seize treatment for patients receiving large daily dosages of the drug.

These recommendations were first put in place six years ago in an effort to curb rising opioid addiction and overdose rates.

Opioids are highly addictive, and over prescription and overuse of the drugs has fueled a massive drug overdose problem in the U.S. Between April 2020 to April 2021, a record 100,000 Americans died of a drug overdose – with around 75 percent being attributable to opioids.

On the other hand, these drugs are key to pain management and cutting people off from the drugs out of fear of addiction could be considered cruel. There is no replacement drug as effective as opioids for managing pain, and taking them away all-together is not feasible.

The CDC is lifting some restrictive guidelines it put in place in regards to opioid use in 2016, saying they were misused and misinterpreted. The revered guidelines include a three day limit on treatment, limits to only 90 mg of morphine daily and halting the sudden stopping of treatment for patients using large doses of the drugs to manage pain

‘We began to hear how the guidelines were being misused and misapplied’ said the CDC’s Christopher Jones, a co-author of the draft guidance.

The agency will not finalize its updated guidance for 60 days, allowing a two-month period for public comment first.

The general intent is to foster individualized patient care, Jones said. It also offers more options for treating the kind of short-term, acute pain that follows surgeries or injuries.

Its critics have included pain patients, but also painkiller manufacturers and groups they fund, she said. 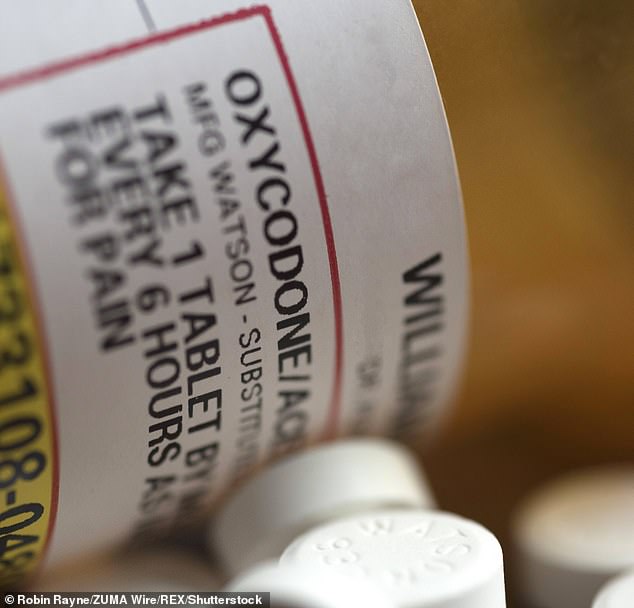 Opioids rose to prominence in the medical field in the 1990s, and the highly addictive drugs have been blamed for the country’s drug addiction issues. 78% of the record 100,000 drug overdose deaths during the first year of the pandemic were caused by Opioids, the CDC reports.

‘There was nothing wrong with the original guidelines,’ said Fugh-Berman, a paid expert witness for plaintiffs in cases targeting pharmaceutical marketing practices.

Opioids can be an important tool in treating severe pain from cancer, surgery and serious injuries.

But they also can be addictive – even when used under doctors´ orders.

Beginning in the 1990s, some drugmakers, insurers and pain specialists called for wider use of the drugs for more common ailments like backaches and arthritis.

The push was tied into the marketing of drugs like OxyContin, which were billed as less addictive than other opioids.

The first year of the pandemic proved to be the worst for America’s drug addiction crisis, with 100,306 people dying from an overdose nationwide, and 78,000 of those deaths being attributed to opioids.

States like West Virginia and Kentucky in the Appalachian region were among the hardest struck. 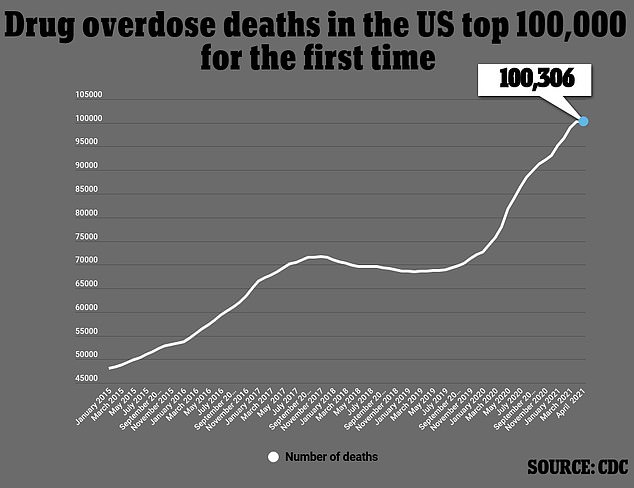 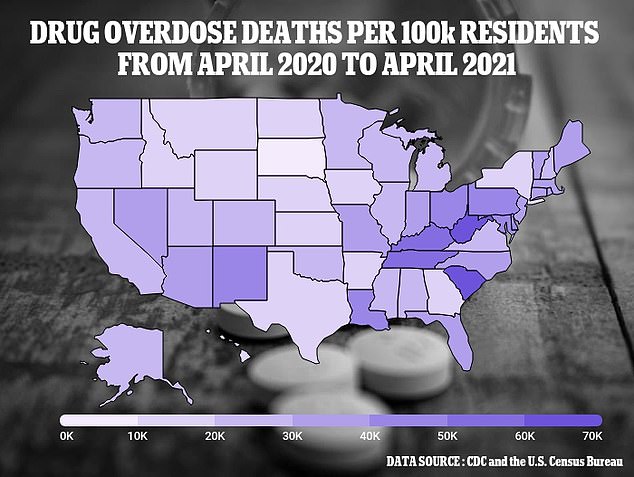 States in the Appalachian Region of the country have been struck hardest by drug overdoses, with West Virginia, South Carolina, Tennessee, Ohio and Pennsylvania among the leaders in overdose deaths per 100,000 residents

Governments tried to restrict the prescriptions, but the overdose epidemic worsened as people hooked on pills switched to heroin and then to fentanyl.

Those kinds of illegal injected drugs are now associated with the majority of U.S. overdose deaths.

The CDC’s 2016 prescribing guidelines said opioids should not be the first treatment for chronic pain.

Doctors were urged to first try other medications or nondrug options, limit opioid prescriptions for short-term pain to three days, and to prescribe the lowest effective dose possible.

The guidelines are voluntary, but they were widely adopted and added momentum to a dramatic decline in opioid painkiller prescriptions.

They also came under attack from pain patients and drug manufacturers, who argued some people in severe pain were being denied needed relief.

In 2019, CDC officials signaled that they were concerned about those reports. They examined newer research, resulting in the new proposal, Jones said. Drugmakers had no input into the writing of the draft revision, he said.