Covid is showing more signs of receding across the U.S., with rampant case growth in much of the nation showing signs of finally slowing. Last week, almost every state in America was recording a doubling of cases over two weeks. As of Wednesday morning, seven U.S. states are recording declining cases. Cases have doubled over the past two weeks in only 23 states, and no state has seen its cases quadruple over 14 days.

New Jersey currently leads the U.S. is decline of cases. The Garden state is averaging 197 cases per every 100,000 residents every day – a 40 percent drop over the past two weeks. Like many predicted, the states that suffered Omicron surges the earliest reached their peak, and are now seeing a rapid decline in cases.

New York was struck hard and fast by the variant as well. New York City, like London in the UK, quickly emerged as one of the hardest struck cities in the world. The Empire State was among the leaders in infection rate in late December and early January. Cases are now down 33 percent over the past two weeks – with 230 of every 100,000 residents testing positive daily.

Also along the I95 corridor, Maryland has seen its Covid situation begin to trend in the right direction after after emerging as an early leader during the Omicron surge. Cases in the state are down 35 percent over the past 14 days.

Down south, Georgia and Florida have seen their cases start to decline as well, down 15 percent and 12 percent respectively. At one point, Georgia was the leader in Covid case change across the U.S. south, mainly fueled by outbreaks in the greater Atlanta area. Like New York, the peak of the outbreak was reached and then a rapid decline began.

Case figures in Florida can occasionally be unreliable due to the way the state reports cases, so the reported declines may quickly reverse. 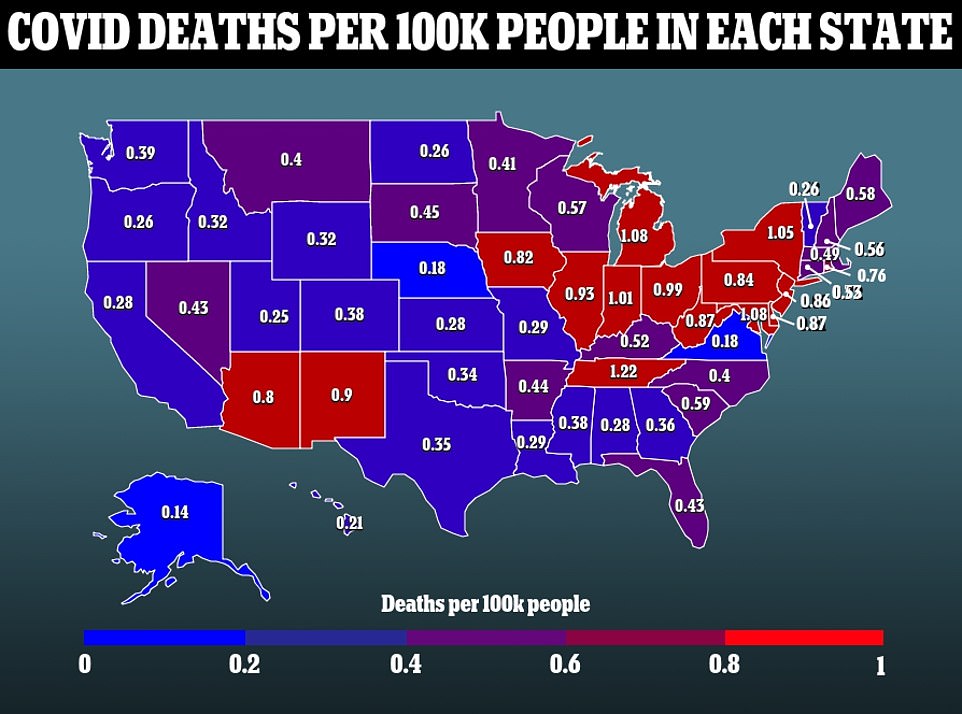 Michigan was once among the hardest struck nations by Covid as well, and their issues with the virus have been ongoing. Even before the Omicron variant started to dominate the U.S., Michigan was suffering from a massive outbreak that overwhelmed hospitals in the state.

The state has since seen a 16 percent drop in daily cases over the past two weeks. The Great Lakes state also has the second lowest infection rate in America, with 99 of every 100,000 residents testing positive daily – only trailing Maine.

Connecticut, one of the most vaccinated states in America with 76 percent of residents having received the shots, has also recorded a seven percent drop in new cases.

While cases are still rising in many states, and rising by large margin, the levels of growth in nationwide leaders has shrunk. Two weeks ago, for example, states like South Carolina were recording two-week case increases of over 800 percent.

Now, Wisconsin is the leader in case increases, with daily cases jumping 260 percent over the past two weeks – up to 407 infections per every 100,000 residents daily. The Badger state is also now second in nationwide infection rate – only trailing the long-time leader, Rhode Island.

Only seven other states have had cases triple over the past 14 days. While it is still a high figure, at some points last week nearly every state west of the Mississippi river was experiencing 200 percent case increases or more. All of the states that are recording these massive shifts of cases are out west – other that South Carolina which still remains among the case growth leaders at 216 percent.

Rhode Island continues to hold the dubious honor of having the highest infection rate in America – despite its 78 percent vaccination rate being the highest of any state – with 437 of every 100,000 residents testing positive for the virus every day. Only Wisconsin also has an infection rate of 400 per 100,000 or more.

The growth of cases in South Carolina may be slowing, but the state has now joined the ranks of states with the highest infection rates in America. The Palmetto state is logging 341 cases per every 100,000 residents as of Wednesday in what is still the worst Covid outbreak on the east coast.

Maine joins Michigan as the only states in America with less than 100 daily cases per every 100,000 residents – at only 66.

Tennessee is now the leader in Covid mortality rate in America, with the Volunteer state storming the leaderboards in recent days. Only 52 percent of residents are vaccinated, and that seems to be reflected in the 1.22 deaths per every 100,000 residents.

Three states where Covid cases are declining are still suffering high mortality rates, an example of how deaths often lag behind cases by a few weeks. Maryland (1.08 deaths per every 100,000 residents), Michigan (1.08) and New York (1.05) are among the leaders as well.

Indiana led the nation in mortality rate for the past week, but has seen its death rate gradually decline, now down to 1.01 deaths per every 100,000 residents as on Wednesday.