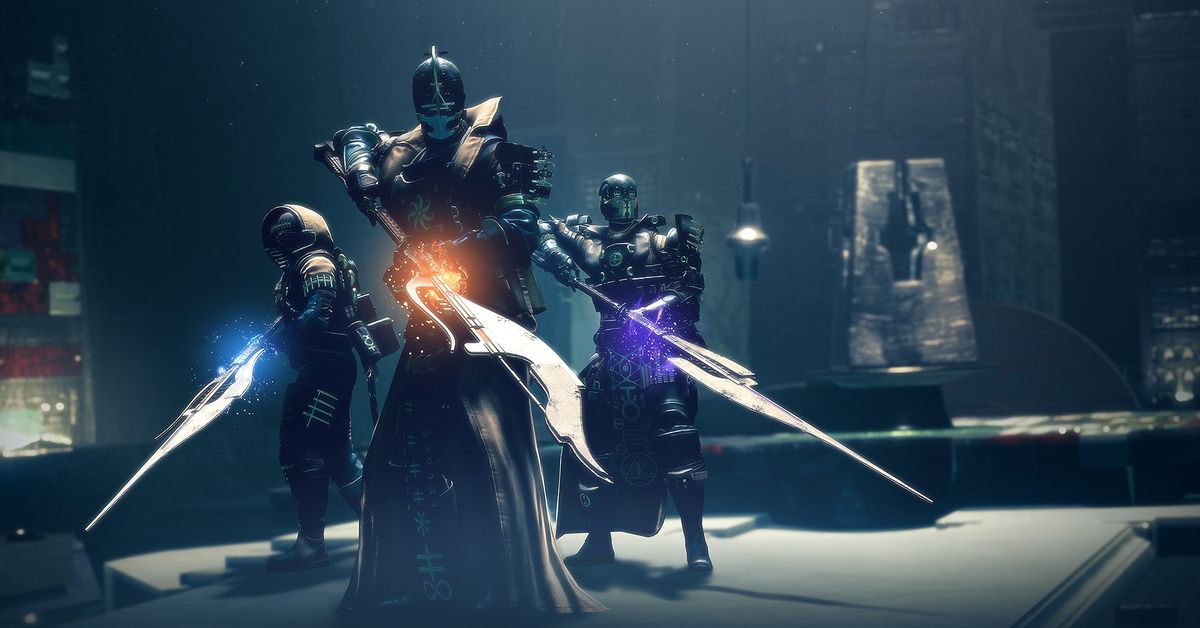 Destiny 2: The Witch Queen, the game’s most-hyped expansion since Forsaken in 2018, is only two weeks away. On Tuesday, Bungie debuted what’s sure to be its final preview of the add-on, a 13-minute video detailing The Witch Queen’s new campaign and Void 3.0 subclass rework. But weapon crafting, Origin perks, and general customization are going to be the real star of the show in Destiny 2’s upcoming expansion.

In a preview session hosted by Bungie, we were shown a crafting session, and went on a guided, hands-off tour of the second mission of The Witch Queen. We also spoke to Destiny 2 game director Joe Blackburn and project lead Blake Battle.

After walking my preview group through a campaign mission in Savathun’s Throneworld, Blackburn and the Bungie team took us to Mars. This wasn’t the open-world Mars I remembered from Destiny or Destiny 2. Instead it was a small landing zone, an Enclave social space with NPC Guardians, an It’s Always Sunny In Philadelphia-esque mystery board, and a secret.

Down the stairs from the Enclave rests the Relic, a place where I and my Destiny Fireteam members will be spending many hours over the next few years. The Relic is a sort of “sci-fi 3D printer,” a place to build and customize weapons in a way Guardians have never been able to before.

Pulling up the menu, the interface looks slick. Players can choose “shape” to craft new weapons or “reshape” them, altering the perks on something they’ve built before. Crafting starts rather limited, with players only having access to a few perks, “pattern” blueprints, and customizations, like frames. By playing Destiny 2, their repertoire will expand.

Weapon crafting in Destiny 2 isn’t just about building something powerful for a moment, it’s about investing in something that could still be useful two expansions from now. By using their crafted weapons, Guardians will level them up, similar to how weapon investment worked in the original Destiny. As players hit new level thresholds, they’ll be able to customize their weapon further, tweaking its stats. By level 20 they’ll have unlocked all options for the weapon — including enhanced versions of fan-favorite perks, which will give crafted weapons a slight edge — and players can keep leveling their gun in perpetuity for bragging rights.

It’s a system unmarred by weekly limits, and it addresses a complicated issue in Destiny: sunsetting. With Beyond Light, Bungie introduced the sunsetting system, which made many weapons obsolete, removing their ability to compete with newer weapons. While players need reasons to pick up something new each season — lest the game lose all purpose — removing Guardians’ hard-won toys was too harsh, and Bungie did away with the system in less than six months. But through weapon crafting and the new Origin perks, Bungie is offering sunsetting on player’s terms.

“I’m really bad at golf,” Blackburn told me. “But my dad plays golf, and so I try to golf every so often so I can play with my dad. […] Golf clubs keep getting better and better, right, over time. And so I think we want people to feel like, ‘Hey, the new stuff that’s coming out is exciting.’ But, you know, I think what we’ve learned from our past is we don’t want, necessarily, that new stuff to feel required. […] I mean, I’ve got some really old golf clubs, they still work, I still take them out, and sometimes I hit better shots than other people.”

Unlike the previous sunsetting system, all of players’ current weapons will still be viable in The Witch Queen and beyond, they’ll just be slightly suboptimal. Players who prefer to roll with their old faithful weapons will be just as powerful as they are now, but they won’t be able to take advantage of the Origin perks and their seasonal benefits.

Origins are fixed perks on what Blackburn referred to as a “family,” and they’ll start dropping on every new weapon starting in The Witch Queen. The new season 16 weapons, which are Cabal-themed, will all come with a new Origin perk called Land Tank which offers increased damage resistance after multiple kills. For crafted season 16 “family” weapons, Land Tank is the one thing they won’t be able to customize, as it’s tied to the gun’s blueprint.

Adding a third perk to every gun will certainly get players interested in new weapons, but it doesn’t get to the heart of why Bungie built the sunsetting system in the first place: power creep. By building better and better items, Bungie locks itself into a cycle of steadily increasing player power, which is ultimately unmanageable. That’s why Origin perks will take advantage of the seasonal Artifact to alter the weapon meta each season.

“What I love about the Origin perk solution is it puts a bunch of categories on weapons,” said Blackburn. “[…] You know they fit into the categories because they have that little perk on them. And then that allows us to, using stuff that seasonally resets like the Artifact, push those weapons up into different power bands where it might say ‘hey, you know, season 16, we love void stuff, we love [Cabal]-themed weapons and the psycho hack weapons,’ and so there can be some specific perks that [we] sort of juice that up in a way that makes the meta really different.”

In an example, Blackburn compared Origin perks to Warmind Cells from Season of the Worthy. In that season, Ikelos weapons (when paired with an armor mod) could create explosive orbs that did massive damage. Bungie built the system with sunsetting in mind, but they ended up sticking around when the studio pivoted. Instead of letting them live as ultra-powerful bombs, Bungie nerfed Warmind Cells to keep Destiny 2 from forever being a game about “shooting orange orbs that come out of things.”

Had Origin perks been in place during Season of the Worthy, the system would’ve played out differently. All Ikelos family weapons would’ve come with a Warmind Cell perk, which would generate the explosions on kills, as usual. But Bungie would put special armor mods in the seasonal Artifact, increasing the Warmind Cell perk’s potency for the next three months or so. When the season ended, players could still use Ikelos weapons, but the Cells wouldn’t be nearly as powerful — that is, until the mods came back around in another season.

But Origin perks come on all new weapons, so crafting won’t entirely replace random rolls in The Witch Queen; there will still be weapons that players can’t craft, even beyond quest-based Exotics.

“We’ll have things like the Ritual weapon that can’t be crafted at all, we’ll have some things you probably [think], ‘I wouldn’t expect that would be crafted’ that can be,” said Blackburn. “But we’re also pretty passionate about, ‘Hey, maybe there’s a roll that you can only get through random drops compared to what you can get through crafting.’ […] You’re not always going after drops because they’re fuel, sometimes you’re going after drops because they’re special.”

With Destiny 2: The Witch Queen, Bungie is looking to fundamentally change how players invest in Destiny 2. Instead of just grinding for that perfect roll, players can build a relationship with a single weapon. But for Blackburn and Bungie, it’s not about destroying what came before, or making it obsolete, but rather giving players new options to create for themselves.