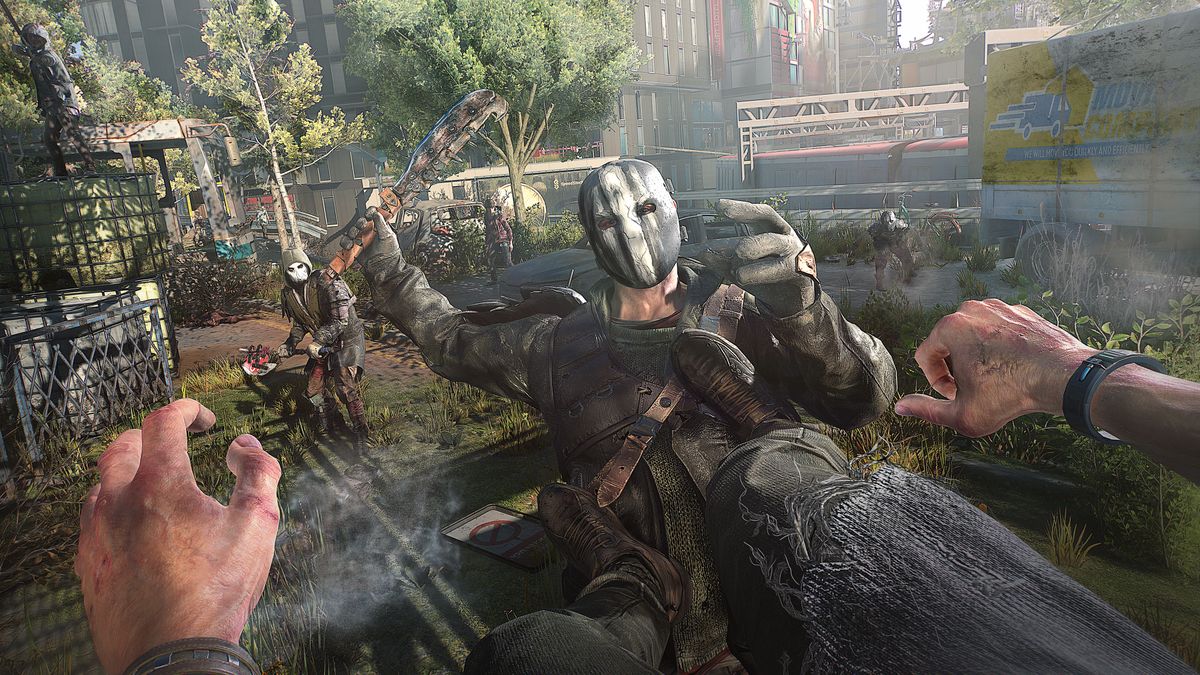 When I first glanced at Dying Light 2‘s expansive skill trees, my eyes immediately hunted for a certain ability that I knew would carry me through the apocalyptic wasteland. Not far down the combat tree I found the dropkick and decided to beeline my unlock points straight to it. I recommend you do the same, because Dying Light 2’s dropkick is as fun as it is overpowered.

Thinking of a dropkick, you might picture a double kick that throws enemies off balance and shoves them a few feet. But it’s so much more. Aiden’s dropkick crumples enemies like a wad of paper and flings them 15 feet in full ragdoll.

Don’t believe in the power of Aiden’s meaty legs? This clip from Reddit user Sherphen really says it all.

As fans of Dying Light 1 already know, the dropkick is the swiss army knife of kicks. It can break up a bundle of zombies giving chase, catapult anything breathing into one of Villedor’s many spiky wall traps, and most importantly, evict any and all combatants from a rooftop. It’s wildly lethal for a move that can be unlocked so early in the game.

Since unlocking it I’ve started incorporating dropkicks into every fight. Parkouring across rooftops, you run into a lot of random bandit encounters. It’s fun enough to dispatch jerks with my beating sticks and modded pipes, but these encounters feel like they were made for the dropkick. My signature move is now opening combat by sending one guy off the roof with zero warning, instantly improving my odds. After that I start hitting dudes to add a little rhythm, but in the background I’m lining up the vector of my next dropkick, inching closer to a rooftop’s edge and baiting the next moron to their gravitational demise.

I’ve even killed stuff with the dropkick that really seemed like I shouldn’t have been allowed to. I got amped up for a long fight with the leader of the first bandit camp I encountered. After landing a few hits that did very little damage, I deployed a single dropkick and instakilled him into a wall of spikes. Dying Light 2’s bigger boss fights seem more resilient to my one and only tactic, but the kick itself still deals respectable damage. The one enemy type I’ve seen that doesn’t react at all to Aiden’s legs is the giant, hulking zombie with a hammer. Just stay away from those guys in general.

My only real gripe with the dropkick is how you activate it. I don’t like having to double tap E while jumping and I don’t think there’s a way to rebind it. I believe you only had to hold E in the first game, but there’s a new, worse ability in the sequel that uses that bind instead.

And as powerful as it is, the dropkick has been slightly nerfed since the first Dying Light. Instead of standing around in awe of the magnificent display of strength, human enemies will mercilessly attack you while you’re vulnerable on the ground. Not that a single blow really matters when they’re next on my kick list.🦵