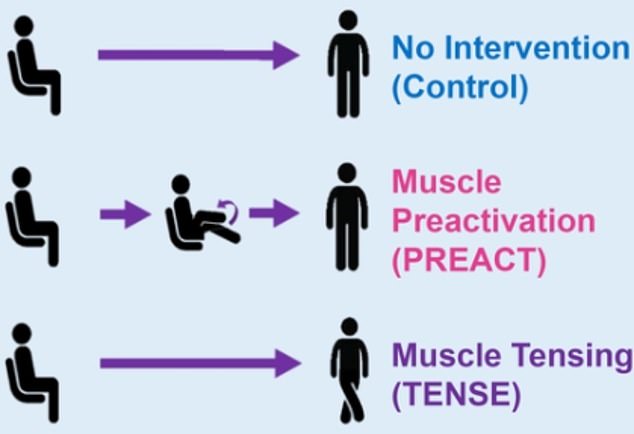 Millions of people suffer bouts of dizziness when they stand up.

But now scientists say they’ve got a simple remedy — crossing your legs after you get up.

Experts in Canada tested the technique on 22 women who complained of feeling dizzy and being light-headed after standing up.

Volunteers who crossed their legs after standing up didn’t see their blood pressure plummet as much.

University of Calgary researchers, who carried out the study, said knee raises before standing up had a similar beneficial effect.

The findings offer a ‘cost-free’ way for postural hypotension patients to manage their condition, which the researchers admitted can be ‘frightening’.

Each of the participants did three sit-to-stand manoeuvres, including standing up normally, lifting their knees before standing up and crossing and tensing their legs immediately after standing up 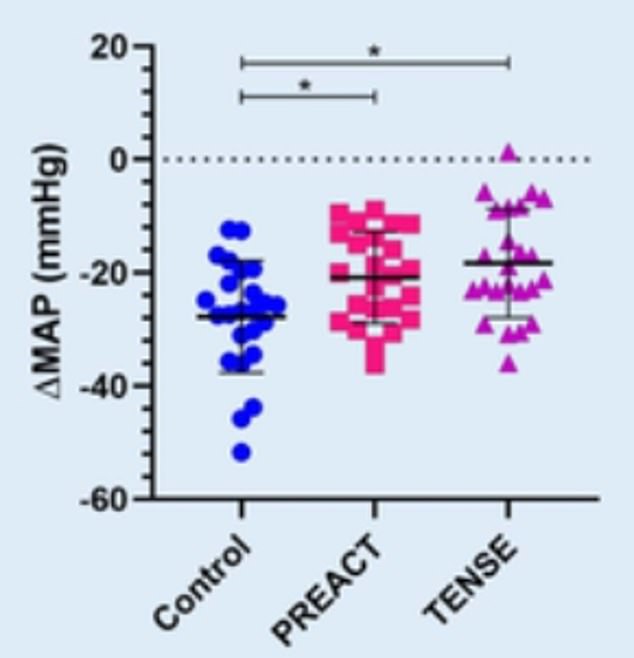 WHAT IS POSTURAL HYPOTENSION?

Postural hypotension is a drop in blood pressure that stops enough blood from getting to the brain.

Its symptoms include feeling dizzy or fainting when getting up quickly from sitting or lying, standing still, getting out of a warm bath and standing up after a big meal.

It can occur at any age but is most common in older people.

Doctors diagnose the condition by measuring blood pressure when lying down and sitting up.

Medics usually give patients advice on how to manage their symptoms, with medicine prescribed in rare cases.

The condition — caused by a drop in blood pressure and an increase in heart rate — can cause lightheadedness and dizziness. In some cases, it can cause people to faint.

It can occur at any age but is most common in older people. Medicines, prolonged bed rest or dehydration are common triggers.

Medics estimate up to 40 per cent of people suffer from the condition, with patients usually given tips to manage their symptoms, such as getting up slowly.

She added patients can ‘utilise’ the technique ‘at any time and from anywhere to combat their symptoms’.

Presenting their results in the journal Heart Rhythm, the team said ‘almost everyone’ has experienced some lightheadedness after standing up.

It is a ‘frequent occurrence’ for some patients, and its effects can ‘be very frightening and negatively impact’ quality of life.

All of the women used in the study — who were 32, on average — felt faint after standing up at least four times a month.

They had to have a drop in systolic blood pressure of 40mmHg upon standing to meet the definition of postural hypotension.

Each of the volunteers performed three different sit-to-stand manoeuvres, including standing up normally.

They were also asked to lift their knees before getting up, as well as cross and tense their legs immediately after standing.

Those who crossed their legs after standing up saw their blood pressure drop 18mmHg, on average, compared to the 28mmHg average drop experienced when they stood up normally.

Researchers said the move worked by increasing their stroke volume — the amount of blood pumped out of the heart per beat.

Meanwhile, repeated knee raises before standing lessened the blood pressure drop (to 20mmHg) by increasing their cardiac output — the amount of blood their heart pumped per minute.

The increases in heart activity had the knock-on effect of reducing dizzy and lightheaded symptoms, the team said.

Dr Mary Runté, an associate professor at the University of Lethbridge in Calgary and co-investigator of the study, said the findings show simple movements can help postural hypotension patients manage their symptoms.

However, they noted the study needs to be validated among men and the elderly.

And further studies should be carried out to learn more about why the movements alleviate symptoms.