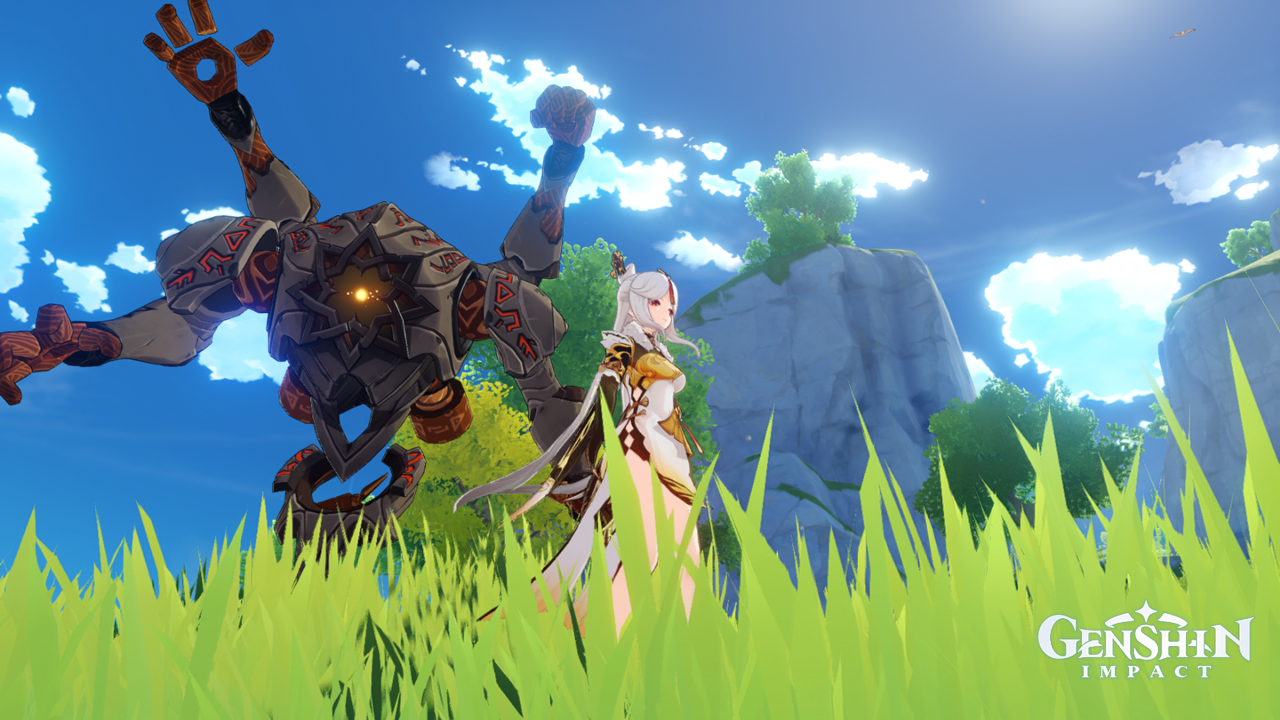 Aside from beasts and humans with and without special abilities, some living beings that are a threat to your journey are war machines. These things are scattered around Teyvat and are commonly known to linger around ruins as they are believed to be remnants of a lost ancient nation.

The Ruin Hunter is a floating machine that can do melee and ranged attacks, which should not be underestimated because they deal massive damage.

Like all other war machines in Teyvat, the Ruin Hunter also has a core that is its weak spot. However, this core is only vulnerable when the Ruin Hunter enters its range mode, flying higher and making its long-ranged attacks.

All machine enemies in Genshin Impact have high resistance to physical attacks. Therefore using Elemental attacks will help you defeat the Ruin Hunter a lot faster.

Since the Ruin Hunter floats around and will enter a state where it flies even higher, catalyst and bow-type characters are recommended. Archers are especially important if you want to hit this war machine’s core as it is shooting you from midair.

Listed below are the attack moves that the Ruin Hunter will do. These include melee while on the ground level and ranged attacks while airborne.

This is the most basic attack that the Ruin Hunter will do. It does not do a lot of damage to you but will interrupt your attacks. A single slash using its left arm is very easy to dodge.

For this melee combo, the Ruin Hunter will use its right arm to do the initial slash, follow it up with a second slash with the other arm, a spin, and then one last slash.

Make sure to avoid the first slash because this will interrupt your movement and make you more susceptible to the other slashes of the combo.

This combo is similar to the Slash Combo 1 but will have an additional horizontal or vertical spin at the end.

The Ruin Hunter can transform its arms into a few weapons, one of which is a drill. It will chargeback before quickly thrusting the drill towards you.

When the Ruin Hunter starts charging, keep your eyes and time your dodge perfectly.

At any point in the fight against the Ruin Hunter, it will fly higher to make some ranged attacks.

The Ruin Hunter will shoot projectiles up to the sky, and then markings on the ground will appear to indicate where those projectiles will land and explode.

Saving your stamina and looking out for the marking on the ground will be the best way to avoid getting hit by this attack.

Missiles can also be sent out towards you and follow you to a certain point. The best way to avoid these projectiles is to dodge when they are close to you, and not just run away by the time they are being shot.

While dodging missiles and other projectiles that the Ruin Hunter sent to hit you, it can also fire volleys of bullets, especially when you are running too far from it.

While airborne, the Ruin Hunter could charge and shoot concentrated energy at you.

When you are close to or below the Ruin Hunter while airborne, it will possibly shoot a laser shower. Its arms or thrusters will face down, spin to charge, and then shoot four laser blasts at once.

The Ruin Hunter usually returns to its melee mode after this move.

Now that you have ideas on the Ruin Hunter’s attacks and weaknesses fighting one should not be as difficult. A few practice by hunting some of these war machines and facing one in the future will no longer be a problem.