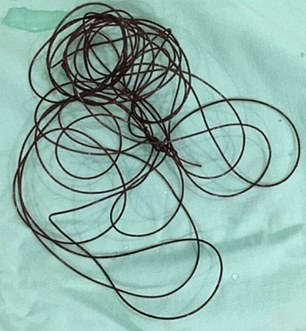 The patient, who doctors didn’t identify, went to a hospital in Surabaya and told medics he had suffered from abdominal pain for two hours.

The man, who escaped any permanent injury, also complained of struggling to urinate and passing blood.

Detailing the man’s incident in Radiology Case Reports, medics who treated him wrote that cases of urinary bladder insertion are ‘relatively rare’ but have been on the rise over the last few decades.

They said people usually insert objects — such as hair clips, straws, matchsticks and pencils — into their urethra for sexual pleasure, or due to psychiatric problems or drug abuse.

Those who do it for sexual pleasure often delay seeking medical help and give inaccurate information to doctors due to embarassment, increasing the risk of complications, such as recurrent urinary tract infections, bladder stones and sepsis.

Medics have warned the practice can damage sensitive tissue in the urethral pathway, which releases urine and sperm. It can also lead to a lack of bladder control and infection.

And the penis and urethra may even require surgery or implants to rebuild sensitive tissue.

Doctors performed bladder irrigation — a procedure when a sterile fluid is flushed through a catheter into the bladder to remove blockages — in the hopes this would dislodge the string. But this treatment was ineffective.

They then performed a cystoscopy — when a camera is inserted into the bladder through a tube so doctors can see inside.

Medics saw a ‘black bundle of nylon string’ and were finally able to remove it using long thin tweezers.

The patient, who was kept in hospital for two days so doctors could monitor him, fully recovered.

But a psychiatrist, who he was referred to by medics, said he had obsessive-compulsive disorder and paraphilia — getting aroused by something regarded as unusual.

It comes after a separate report of a 30-year-old man in Michigan shoved six kidney beans inside his penis for sexual pleasure — but they ended up getting stuck.

Medics were eventually able to remove the beans after stretching the man’s urethra open and using surgical tools to scoop them out.

What is sounding? And why can it be dangerous?

Sounding is when men insert items into the opening of the penis to enhance their sexual pleasure.

It usually involves specially designed tools made from glass or metal.

Men interested in the practice should understand the risks and purchase equipment from reputable businesses and ensure they do it hygienically.

But they warned the practice can damage the sensitive tissue in the urethral pathway, which releases urine and sperm.

It can also lead to a lack of bladder control and infection.

And the penis and urethra may even require surgery or implants to rebuild sensitive tissue.

Doctors at Sparrow Hospital in Lansing, who treated a man who put kidney beans in his urethra for sexual pleasure, said it’s important for doctors to work out why someone has engaged in sounding.

If they continue to do it they are at higher risk of infection, severe injury or ‘permanent disfigurement’, they said.

So patients may need to be referred for psychiatric care or counselling on safe sex practices to prevent them from doing it again, the medics added.