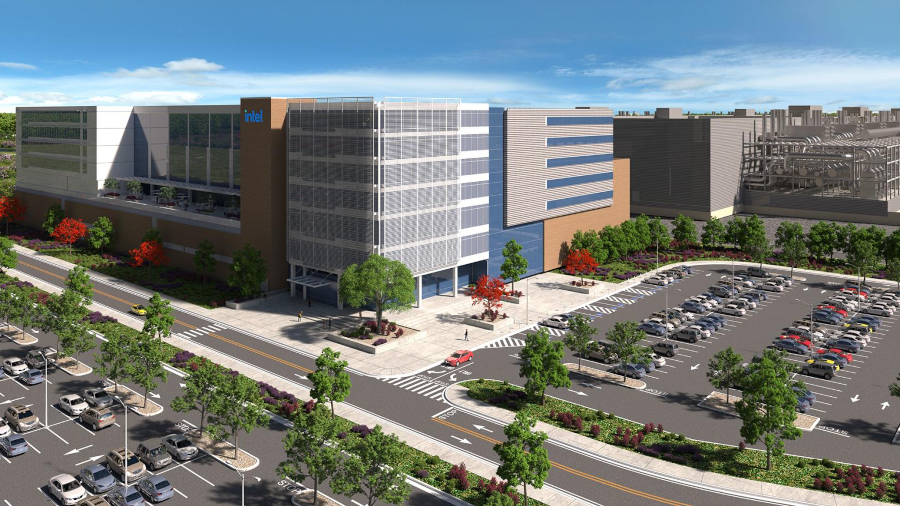 Intel Corp. today announced plans to spend more than $20 billion on the construction of two cutting-edge chip manufacturing facilities, or fabs, in Ohio.

The fabs will be located on what the company describes as a nearly 1,000-acre “mega-site” in Licking County, near Columbus. Intel said that the mega-site can in theory accommodate no fewer than eight fabs as well as related support operations. The company estimates that its total investment in the campus could reach as much as $100 billion over the next decade.

Construction is set to begin towards the end of the year, with chip production expected to start in 2025. Intel estimates that the development will create 7,000 construction jobs, as well as 3,000 new roles across its business once the facilities are set up. The company expects tens of thousands of additional jobs to be created in the long term across its ecosystem partners and suppliers.

Intel is building the two fabs based on green construction principles. The factories will eventually be powered entirely by renewable energy and, the chipmaker said today, it hopes to achieve “zero total waste to landfill” status as well. Another goal set by Intel is to reach net positive water use at the site, which means that the company will replenish more water than its manufacturing operations use.

“This investment is a big win for Intel, for American manufacturing, and for American consumers who can look forward to lower prices as we bring home production of the semiconductors that keep our economy running,” U.S. Secretary of Commerce Gina Raimondo said in a statement. “From his first day in office, President Biden has recognized that if we want to compete globally, we need to invest domestically.”

The Ohio fabs are set to manufacture not only Intel’s internally-designed processors, but also chips that the company will make for customers based on their own designs. Intel plans to make semiconductors for other firms through its new Intel Foundry Services contract manufacturing business. The business, which was set up last year, counts Qualcomm Inc. and Amazon Web Services Inc. as early customers.

“The Ohio factories are designed for the ‘Angstrom era,’ with support for Intel’s most advanced process technologies, including Intel 18A,” said Randhir Thakur, the Senior Vice President and President of Intel Foundry Services. “These technologies are critical for enabling next-generation foundry customer products across a range of applications, from high-performance mobile to artificial intelligence.”

The Intel 18A process that the Ohio fabs will support is an upcoming chip manufacturing technology reportedly set to be rolled out by Intel in the second half of 2025. The technology will enable the company to produce faster, more efficient processors than is possible today.

Today’s most advanced chips are made with machines known as extreme ultraviolet lithography, or EUV, systems. They produce transistors by using laser light to carve circuits into silicon wafers. With its 18A process, Intel plans to make chips using a more advanced type of EUV system known as a High NA EUV machine. Such systems will produce more powerful beams of laser light than today’s hardware.

High NA EUV machines are not yet available on the market. But last year, Intel said that it expects to receive the very first High NA EUV once it’s built thanks to a partnership with ASML Holding LV, the top maker of extreme ultraviolet lithography hardware.

“Intel is bringing leading capability and capacity back to the United States to strengthen the global semiconductor industry,” said Intel CEO Pat Gelsinger. “These factories will create a new epicenter for advanced chipmaking in the U.S. that will bolster Intel’s domestic lab-to-fab pipeline and strengthen Ohio’s leadership in research and high tech.”

Alongside its plans for the two new chip fabs, Intel today announced that it will pledge another $100 million toward partnerships with educational institutions. The initiative aims to “build a pipeline of talent and bolster research programs in the region,” the company said.

Intel will invest the $100 million allocated to the initiative over the next decade in partnership with Ohio universities, community colleges and the U.S. National Science Foundation. On the agenda: creating semiconductor-specific curricula for associate and undergraduate degree programs. Additionally, Intel plans to pursue collaborative research projects with the organizations participating in the initiative.

Previously, Intel in early 2021 announced plans to build two new chip fabrication facilities in Arizona at a cost of $20 billion. More recently, the company said last September that it could spend as much as $95 billion to construct up to eight new chip plants in Europe.

According to a December report from Bloomberg, Intel plans to set up a fab in Germany as a part of the initiative that will cost an estimated $20 billion. The chipmaker is said to have set aside another $10 billion for a new test and assembly facility in Italy. Additionally, Intel reportedly intends to set up a chip research and design center in France.