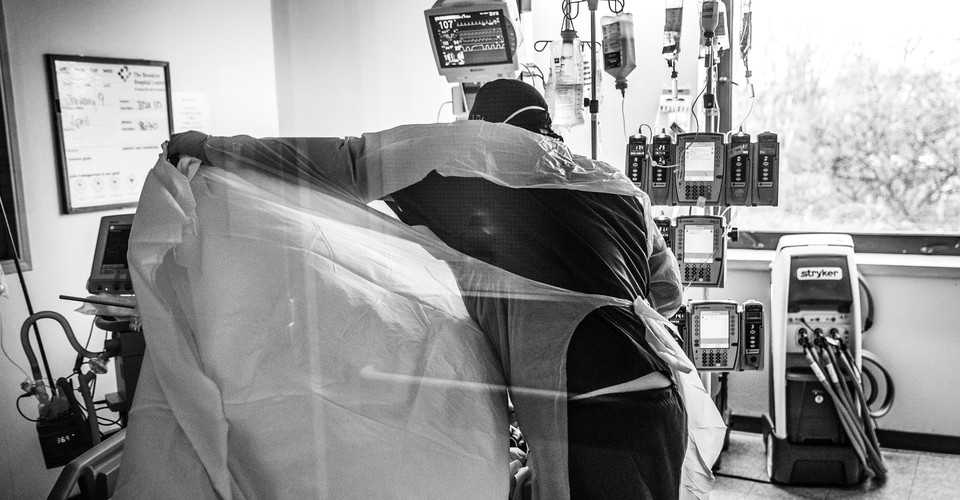 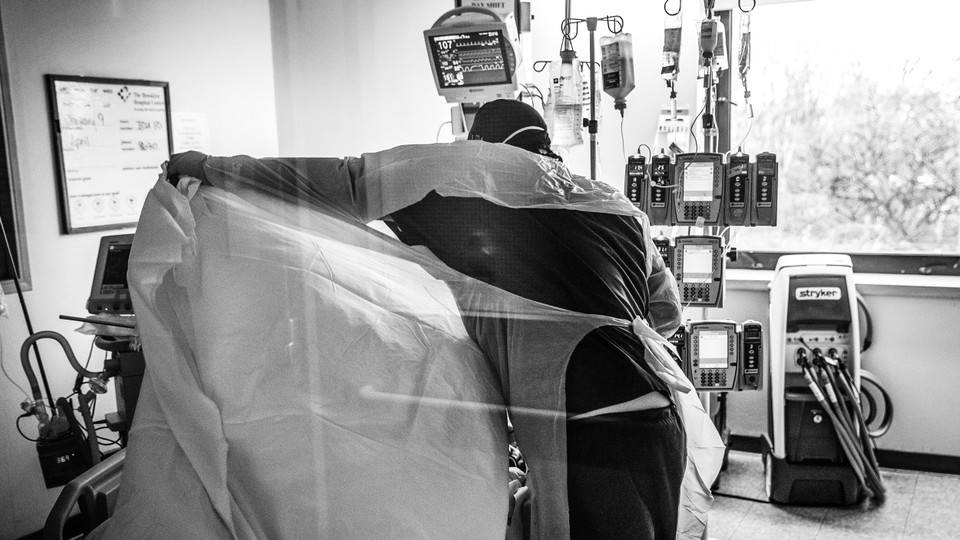 More Americans are now hospitalized with COVID-19 than ever before. Their sheer numbers are overwhelming health-care workers, whose ranks have been diminished by resignations and breakthrough infections. In many parts of the country, patients with all kinds of medical emergencies now face long waits and worse care. After writing about this crisis earlier this month, I heard from a number of readers who said that the solution was obvious: Deny medical care to unvaccinated adults. Such arguments were aired last year, as the Delta variant crested, and they’re emerging again as Omicron spreads. Their rationale often goes something like this:

Every adult in the U.S. has been eligible for vaccines since April. At this point, the unvaccinated have made their choice. That choice is hurting everyone else, by perpetuating the pandemic and, now, by crushing the health-care system. Most of the people hospitalized with COVID are unvaccinated. It’s unethical that health-care workers should sacrifice for people who won’t take care of themselves. And it’s especially unethical that even vaccinated people, who did everything right, might be unable to get care for heart attacks or strokes because emergency rooms are choked with unvaccinated COVID patients.

To be clear, this debate is theoretical: Health-care workers are not denying care to unvaccinated patients, even though, ironically, many told me they’ve been accused of doing so by not prescribing ivermectin or hydroxychloroquine, which are ineffective against COVID but are often wrongly billed as lifesavers. Still, I ran this argument past several ethicists, clinicians, and public-health practitioners. Many of them sympathized with the exasperation and fear behind the sentiment. But all of them said that it was an awful idea—unethical, impractical, and founded on a shallow understanding of why some people remain unvaccinated.

Read: Hospitals are in serious trouble

“It’s an understandable response out of frustration and anger, and it is completely contrary to the tenets of medical ethics, which have stood pretty firm since the Second World War,” Matt Wynia, a doctor and ethicist at the University of Colorado, told me. “We don’t use the medical-care system as a way of meting out justice. We don’t use it to punish people for their social choices.” The matter “is pretty cut-and-dry,” Sara Murray, a hospitalist at UC San Francisco, added. “We have an ethical obligation to provide care for people regardless of the choices they made, and that stands true for our unvaccinated patients.”

Unlike vaccine mandates, which limit the jobs unvaccinated people can hold or the spaces they can enter, withholding medical care would be a matter of life or death. And in such matters, medical care should be offered according to the urgency of a patient’s need, not the circumstances leading up to that need. People whose actions endangered themselves, like smokers with lung cancer or drivers who crash while not wearing a seatbelt, still get treated. Those whose actions endangered others, like drunk drivers or terrorists, also get treated. “We are all sinners,” Carla Keirns, a professor of medical ethics and palliative medicine at the University of Kansas Medical Center, told me. “No one has made all the perfect decisions, and any of us could find ourselves in a situation where we are sick.” It is a fundamental principle of modern medicine that “everyone has an equal claim to relief from suffering, no matter what they’ve done or haven’t done,” Daniel Goldberg, a medical historian and public-health ethicist at the University of Colorado, told me.

As historical examples show, the most privileged people usually benefit when care is allocated. In the 1960s, when dialysis machines were still rare, a group of seven laypeople were tasked with deciding which patients should receive the lifesaving treatment. Among factors such as age, sex, marital status, wealth, and education, the so-called God Committee also considered which people had “the highest potential of service to society” and were “active in church work.” Unsurprisingly, as later analyses showed, the committee favored middle-aged, middle-class white men. “When it became public, Americans were outraged,” Keirns told me. “They recognized that when you try to make moral distinctions, you end up holding against people circumstances beyond their control.”

Read: What the chaos in hospitals is doing to doctors

A person’s choices are always constrained by their circumstances. Even now, unvaccinated people are not all refusers. Using recent survey data from the U.S. Census Bureau, the health-policy researcher Julia Raifman and the economist Aaron Sojourner have shown that unvaccinated Americans are disproportionately poor—and within the lowest income brackets, people who want or would consider a vaccine outnumber those who would never get one. That they still haven’t gotten the shots might seem inexplicable to people who can just pop into their local CVS. But people who live in poor neighborhoods might not have a local pharmacy, or public transport that would take them to one, or internet access that would allow them to book an appointment. People who earn hourly wages might not have time for a vaccination appointment, or paid sick leave for weathering any side effects.

Compared to vaccinated people, unvaccinated people are more likely to live in red states—a correlation that’s commonly seen as a reflection of political choice. But they are also more likely to have other pressing concerns, such as child-care demands, food insecurity, and eviction risk. “Even in Vermont, the most vaccinated state, differences in vaccination closely mirror other social disparities, like household income,” Anne Sosin, a health-equity researcher at Dartmouth, told me. Unvaccinated people are twice as likely to lack health insurance as their vaccinated counterparts, so to a degree, the U.S. is already denying them care. To lean into that denial “would compound the unjust disparities that they already face,” Keirns said.

Read: America is getting unvaccinated people all wrong

Die-hard anti-vaxxers obviously exist, and they tend to be loud and antagonistic. Many health-care workers have told me that they’ve been harangued, threatened, or assaulted by such patients, frequently enough to erode their compassion. Others have said that such patients make themselves harder to treat by resisting medical care and demanding ineffective drugs. But even the most trenchant anti-vaccine attitudes can reflect deeper social problems. Vaccine skeptics might broadly distrust a health-care system that they struggle to access. They might not have regular physicians whom they trust for medical guidance. They might be immersed in right-wing sources who have sown misinformation about vaccines, or communities for whom hesitancy is the norm. “We’ve irrigated many of our rural communities with more misinformation than investments in health care, education, and economic well-being,” Sosin told me.

Moral arguments aside, withholding care from unvaccinated people is also logistically unfeasible. No one I talked with could imagine a patient arriving in need and having to wait while a health-care worker checks their vaccine card. But if the hospital crisis gets worse, the urge to conserve resources may force health-care workers to make tough choices. Vaccinated patients are more likely to survive a coronavirus infection than unvaccinated ones, and health-care workers might give them more attention as a medical judgment rather than a moral one. (But such calculus is tricky: “You should preferentially give monoclonal antibodies to unvaccinated people,” Wynia told me, because each dose will be more likely to keep someone out of the hospital.)

As health-care workers become more exhausted, demoralized, and furious, they might also unconsciously put less effort into treating unvaccinated patients. After all, implicit biases mean that many groups of people already receive poorer care despite the ethical principles that medicine is meant to uphold. Complex illnesses that disproportionately affect women, such as myalgic encephalomyelitis, dysautonomia, and now long COVID, are often dismissed because of stereotypes of women as hysterical and overly emotional. Black people are undertreated for pain because of persistent racist beliefs that they are less sensitive to it or have thicker skin. Disabled people often receive worse care because of ingrained beliefs that their lives are less meaningful. These biases exist—but they should be resisted. “Stigma and discrimination as a prism for allocating health-care services is already embedded in our society,” Goldberg told me. “The last thing we should do is to celebrate it.”

During times of crisis, loosening one’s ethical standards is especially tempting, but it’s especially important to hold them high, Wynia told me. That’s a frustrating line for health-care workers to hold, however. They will continue to suffer from burnout, moral distress, and harassment—and many will quit. Medical care will be spread even more thinly. Some people who did everything they could to avoid COVID may die from unrelated conditions. None of this is fair. Nor is it solely the responsibility of unvaccinated people.

Many hospitals are also full of other patients who deferred their care for a year or more, and now can’t delay any more. Several institutions mistreated their staff throughout the pandemic, cutting salaries, reducing benefits, and denying time off until many employees decided to quit. Breakthrough infections have forced a record number of the remaining health-care workers away from bedsides. “Even if you said we’re going to downgrade the care we give to [unvaccinated COVID patients], it wouldn’t necessarily upgrade the care for everyone else,” Wynia said.

Most important, unvaccinated people are not the only ones transmitting the coronavirus. They’re more likely to do so than vaccinated people, but the latter are still contributing to the virus’s spread—and perhaps substantially so, given Omicron’s ability to partially evade immune defenses. Vaccinated people might have low personal risk of severe illness, but they can still slingshot the virus to vulnerable people who then end up in hospitals. They might not be occupying emergency rooms with their bodies, but they can still help fill those rooms through their actions.

As President Joe Biden has continued to talk about a “pandemic of the unvaccinated,” COVID remains a collective crisis—and one driven more by political inaction than personal irresponsibility. It’s the result of an earlier administration that downplayed the pandemic; the current one that went all in on vaccines at the expense of the layered interventions necessary to control the virus; justices and lawmakers who have made it harder, if not impossible, to enact policies that protect people from infection; news sources that seeded misinformation; and social-media platforms that allowed it to proliferate. Blaming or neglecting unvaccinated people won’t save the health-care system or end the pandemic. It will just be the latest manifestation of America’s instinct to punish individuals for societal failures.