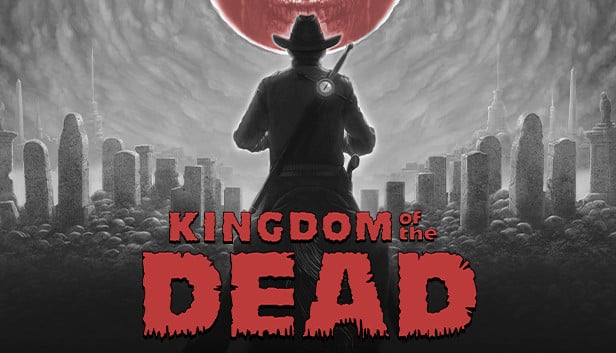 Kingdom of the Dead is a monochromatic horror first-person shooter boasting a pen-and-ink-drawn art style. Developed by Dirigo Games, Kingdom of the Dead aims to replicate the old-school shooter genre such as Doom and Quake. The game will be available on steam by February 11, 2022. With its old-school gameplay and electro-atmospheric type of music, is it worth your time and your money? In this Kingdom of the Dead review, we will be breaking the game down to its core. Let’s get started.

Story of Kingdom of the Dead

You play as Agent Chamberlain. He is a former professor turned into an army general. Eventually, the government recruits him for their secret program named GATEKEEPER.

The main purpose of the secret program is to defeat Death and its keepers. There are eight playable levels, and the goal for each level is to destroy the skull that protects the gateway. Additionally, a boss monster always protects the skull at the end of each level. Overall, the story is lackluster; it feels lifeless and soulless, like the enemies.

Your primary weapon is a magnum and a sword. The sword’s main use is to destroy the skulls at the end of each level. You can use the sword to defeat enemies, but this is not viable because it does minuscule damage.

On every level, you’ll start with the magnum and a sword. Eventually, you’ll be able to garner weapons throughout each level, such as the classic shotgun, a bolt-action rifle as well as a minigun. A throwable dynamite is also collectible at every level.

The gameplay is reminiscent of 3D Quake and Doom, which offers a first-person, fast-paced run-and-gun gameplay style. You’ll be plowing through hordes of enemies with your weapons, and there are lots of enemies per level, so it’s pretty fun doing a 360 no scope on certain enemies.

A part of the gameplay level is rescuing citizens trapped and kept as prisoners throughout a single level. The checkpoints come in the form of books scattered around the map, and you need to approach the books to save your progress. Doing so will allow you to restart at the checkpoint if you die during your playthrough.

The game offers a unique aesthetic with its black and white sketch-style graphics. It does look great; however, it poses problems due to some parts being overly dark. Enemies can’t be seen instantly due to the artwork style.

Although the game offers various visual settings, I opted to go with the standard one because the developers initially aimed for this art style, so I’m sticking with it.

I did try out some of these presets, but it just doesn’t seem to fit my taste. It’s like a bad Instagram filter, and it doesn’t work. I appreciate this gesture from the developers; maybe other people will find this feature useful.

The background for Kingdom of the Dead is phenomenal. It’s an electronic-atmospheric type of music that is different according to where you are at each level. It gives you that good energetic vibe while slaying monsters. In my opinion, Dirigo Games did a great job at composing the music for this type of game.

Kingdom of the Dead: The Worst is Yet to Come

Now that we have laid out the foundation for the game. Let’s talk about where the game falters or what makes it unplayable to some extent. I did try to love this game; however, it does a great job of making me dislike it.

Every gamer hates a game that performs terribly with their system. Kingdom of the Dead is one of those games. I relatively have a decent gaming rig. Here are some of my PC specifications:

You would think this would be enough to utilize my 144Hz monitor to its fullest capacity, right? You’re mistaken. At the initial level of the game “Mansion”, my rig struggled to stay at 30 FPS when directly looking at the mansion itself. It sucks since I can play recent games at decent settings with at least 60 FPS. This horrible performance is inexcusable, considering that a game with this graphical fidelity should not be this demanding.

During my playthrough with some of the Kingdom of the Dead’s levels, I noticed that mixing the sound effects is bad. Some of the monsters let out an ear-deafening scream while others have a decent level of cry. It’s weird, and I don’t know if it’s intentional. If they’re going for a jumpscare factor, well, they indeed failed at that.

Not only is the mixing bad, but also the sound effects they used. It feels like they did not put any effort and just got some horror sound effects template freely available on Youtube. It sounds generic, and it isn’t delightful to the ears. From footsteps, monster attacks, to even the sound of your guns. It’s a terrible experience for my ears overall, and I feel like I need to get my ears checked after playing a few hours of the game.

Boss fights are unique encounters to every fight. They should feel great, feel fantastic, and these fights should pose a particular mechanic. To clarify, I’m not saying that boss fights should be somewhat similar to Dark Souls in difficulty. However, in Kingdom of the Dead, the boss fights feel underwhelming at the very least.

Take the first boss for this instance; I initially thought it was complicated since I kept getting one-shot by this worm monster. I then realized that all I needed to do was run and gun my way through. Keep shooting at the mouth with either the shotgun or the magnum, or if I had the opportunity, use a stick of dynamite while it is in the attack animation.

After a few attempts, I told myself, “Wow, what a braindead boss this was.” At the end of the mansion level, he was there again to have a rematch with me. Then I just quickly breezed through the fight. On the next level, the worm was the boss again, oh boy. Talk about recycling your bosses.

As for the other bosses, they were almost the same; shoot them with a minigun while moving backward. They will be quickly dead by doing this strategy, like I said, brain-dead boss fights. It is pretty sad; they heavily promoted the bosses as an epic experience, but it was lackluster, much like the game itself.

Sometimes, the animation works just fine, but for most of my playthrough, the monster attacks and even their running animation looks clunky at best. It feels off seeing the monsters run at you with this weird running animation. When I stood still and just let them attack me, I saw this very generic animation of a sword swing.

A few animation variations would help elevate the game to a different level during these moments. Still, I highly doubt that this is something that the developers can quickly patch into the game.

Dealing with different enemies per area is something that I was looking forward to in this game. The developers boasted 22+ enemies in this short game. However, I didn’t expect to see all the enemies repeatedly scattered throughout different game levels. At some levels, the enemy placement seems out of place.

I was expecting to have some mummy-type monster during the Crypt level, but no. The same type of monster in the mansion level is also present in the Crypt. No, I’m not expecting a thousand of various enemies, but I at least was expecting a reskin of the generic monsters.

Even a simple cloth-wrapped monster in the Crypt would be enough for me, but the developers couldn’t be bothered to reskin some of the monsters to fit the various locations that they have.

Initially, I thought that a deep story and great dialogues would accompany this game. It was a big mistake. What greeted me was a bunch of generic dialogue, which seems like Google translated.

With every conversation presented, I didn’t bother myself even to read it. It wasn’t delightful, and it made me feel more uninterested in the storytelling that the game is trying to offer.

Kingdom of the Dead’s Art Style Hinders its Playability

Kingdom of the Dead’s art style is unique and eye-catching at first glance. However, upon further exploration of the levels, it eventually becomes the game’s downfall. With certain parts of the map being very dark, you can barely see enemies coming for you.

It doesn’t help that most of the enemies only have glowing eyes. You can only see them through their bright eyes and their weapon. Just take a look at the screenshot posted above.

Not to mention that this game can trigger Epilepsy for light-sensitive people, as with every fire of your gun, it produces blinding and flashing lights that can be detrimental to their health. So heed this warning for people who are sensitive to light as there seems to be no warning in the game whatsoever.

The Kingdom of the Dead’s main menu, mission select screen, and HUD is overall uninspiring to the eyes. It’s basic, simple, and is an eyesore in general. It doesn’t captivate me as a gamer, and it doesn’t draw me into playing the game.

When you get to the game itself, a simple HUD with hearts as a health bar and a tiny portion at the bottom right side displays your guns and ammo count for each.

While the HUD is not that bad, just looking at how Quake does their HUD, Kingdom of the Dead is far from what they’re trying to achieve in terms of the HUD style of Quake.

In general, Kingdom of the Dead renders a bad experience due to the number of bugs present. The volume setting in the Options menu doesn’t even work. I had to adjust the volume through Windows itself to achieve a playable volume for my headset. There is also a bug that just completely deadens the music once you respawn from the game over screen.

There is also a bug at the last mission of the game that always results in death. I replayed the checkpoint a few times to finish that mission. It wasn’t enjoyable in general, and the developers should fix it via an update patch.

As of February 10, 2022, I noticed that Steam rolled out a patch for the game. The patch size is about 327MB, and it seems to fix a bunch of bugs including the volume option not working on the menu. However, when I loaded a game level, I couldn’t kill some of the monsters operating a cannon.

Far from my expectations of a patch update, but a step forward in the right direction nonetheless.

Final Verdict for Kingdom of The Dead

While you’re here, check out some of the great reviews that we have for other games!

What did you think of our Kingdom of the Dead Review? Have you played the game yet? Share your thoughts in the comments below.

This review is based on the PC version of Kingdom of the Dead. The key was provided by DIRIGO GAMES.