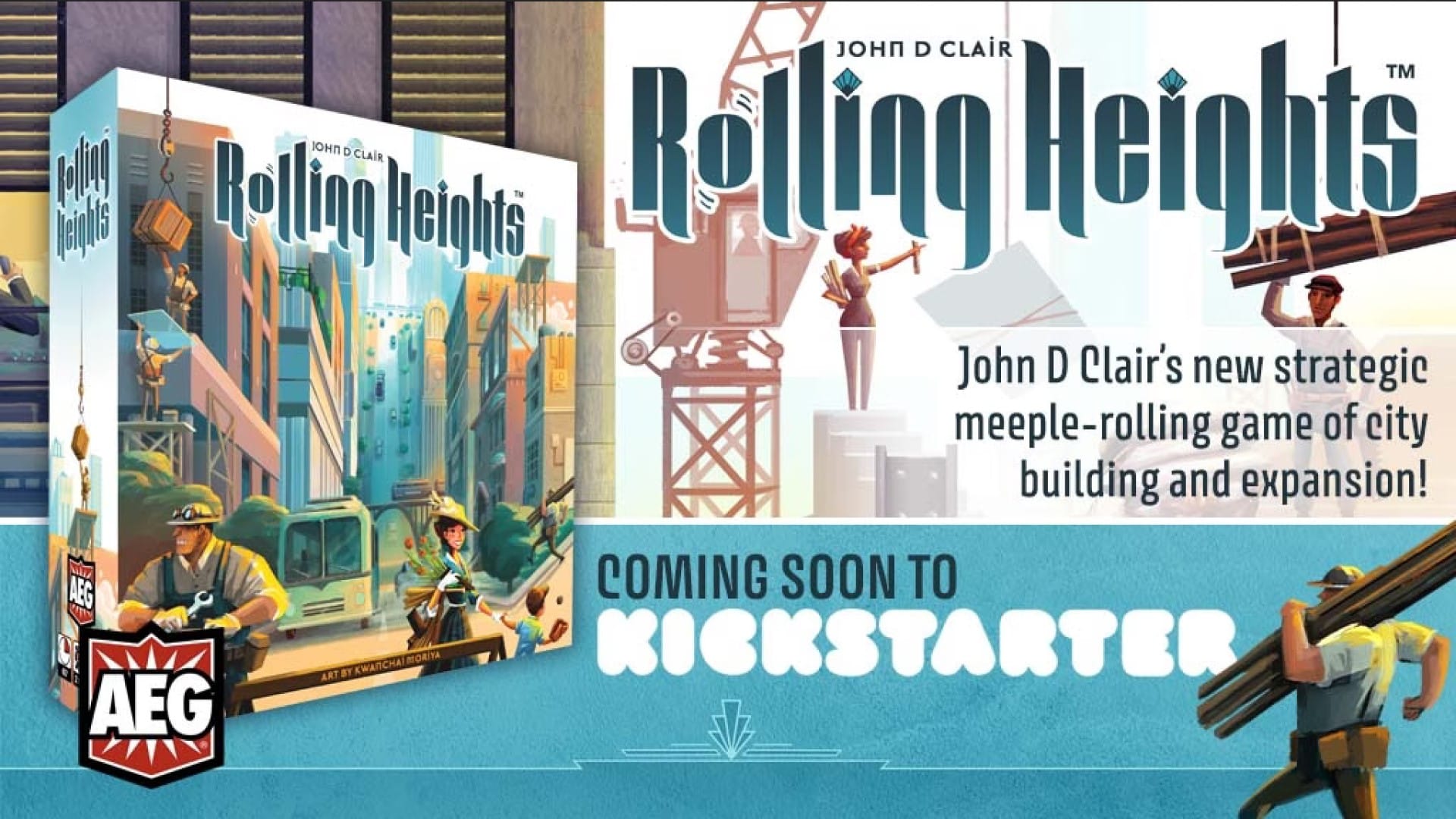 A brand new tabletop board game is coming soon to Kickstarter. The game is called Rolling Heights, and it is a meeple-rolling city builder where players will generate resources and push their luck to construct buildings.

According to an official press release, Rolling Heights is being created by board game designer John D. Clair. Clair’s credit includes the card crafting fantasy games, Mystic Vale, and Edge of Darkness. Furthermore, the game will feature artwork by Kwanchai Moriya, an illustrator with extensive experience in board game graphic design. The game will have two to six players drawing cards containing overall goals for the game. From there, they will select blueprints for the buildings they want to create then take alternating turns rolling their meeples to generate resources. The goal is to have their little person-shaped figures land on their feet, or at the very least not be on their back, in order to generate resources. If the players successfully construct buildings that meet these criteria, they will gain victory points. Whoever has the most at the end wins.

We still had a few questions about the design of Rolling Heights, so we reached out to publisher AEG. Thankfully, one Luke Peterschmidt was happy to share more information.

First, what makes Rolling Heights stand out among its peers is that all of this construction happens on the same city map. This leads to additional logistical situations like figuring out the best placement for a building that doesn’t interfere with your other objectives. Second is that the game is a lot faster than one would suspect. This is done in part by having you roll your meeples for resource generation on another player’s turn, then you spend the resources you created when it is your turn. In addition, there are multiple other meeples to keep track of like glass workers and civil servants, which can lead to more interesting interactions.

As for the overall game feel, Peterschmidt did have a few comments to say as well. “This might sound odd, but the game is really satisfying to play, even when you lose. The board just looks great when you are done – like an overhead shot of a real city! Even when I lose, I get this weird sense of accomplishment in having helped build the city.” On the other end of that kind of wonder, Peterschmidt went on to mention the game would include a kaiju-style mini-game once everything was built. One player rolls the unique giant beast meeple throughout the city, destroying it, while the others play as the army trying to stop it. It does add a comedic bent to cleaning up, which is usually the most tedious part of playing a board game.

But as far as strategy is concerned, Peterschmidt did highlight just how strategic Rolling Heights could get,

“There are quite a few avenues you can focus on your quest for VPs – most center around which meeples you choose to go for and which plans you try to build and where. You can go for early politicians (they score VPs, but don’t actually build anything), you can go for lots of small buildings in order to get more meeples quickly, or you can go for larger buildings to score more VPs. You can focus on the purple meeples (each come with a unique ability), or you can focus on cube producing meeples. You can also choose to focus on end-game scoring or be more reactionary and take whatever the board offers. For such an easy game to teach, there are lots of strategies to explore.”

Rolling Heights’ Kickstarter campaign will be going live on February 8. You can be notified as to its launch by going here.