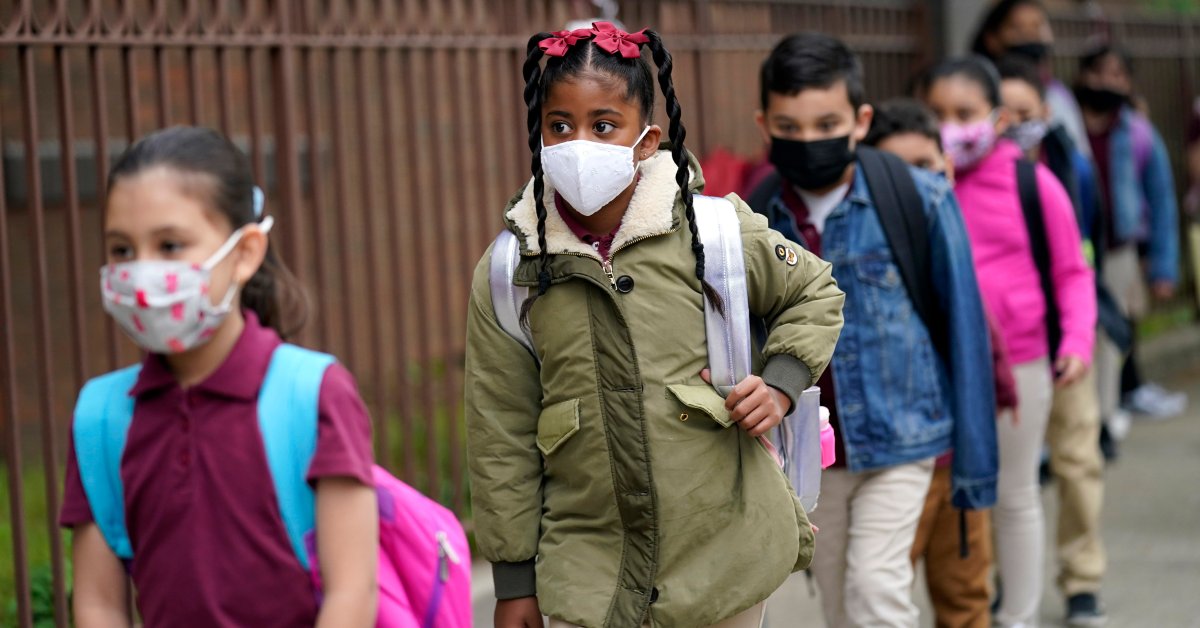 (TRENTON, N.J.) — New Jersey’s governor announced plans Monday to lift the statewide COVID-19 mask requirement in schools a month from now because of the rapid easing of the omicron surge, calling the move “a huge step back to normalcy for our kids.”

New Jersey is one of a dozen states with mask mandates in schools, according to the nonpartisan National Academy for State Health Policy. New Jersey’s has been in place since classes resumed in person in September 2020.
[time-brightcove not-tgx=”true”]

Murphy cited the “dramatic decline in our COVID numbers” in announcing the rollback. The omicron variant fueled a spike in infections over the holidays, but cases in the state are down 50% and hospitalizations dropped off by one-third since last week, he said.

Effective March 7, the statewide mask mandate in schools will be lifted.

Balancing public health with getting back to some semblance of normalcy is not easy. But we can responsibly take this step due to declining COVID numbers and growth in vaccinations. https://t.co/CjnIYZycCe

Omicron is likewise loosening its grip on most of the rest of the U.S., and that has raised hopes among politicians and public health experts that the pandemic may be about to enter a new phase in which the virus becomes like the flu — an ever-present but manageable threat.

“We are not — and I’ve said this many times — going to manage COVID to zero,” Murphy said. “We have to learn how to live with COVID as we move from a pandemic to an endemic phase of this virus.”

Murphy faced pressure from Republicans and some parents who have held rallies at the statehouse demanding an end to the mandate. But the governor has had support for the mask rule up to now from the New Jersey Education Association, the state’s biggest teachers union.

“This is a huge step back to normalcy for our kids,” Murphy said.

In a statement, the union’s leadership noted that trends show COVID-19 heading in the right direction, and added: “It is appropriate for Gov. Murphy to allow local districts to continue to require masking in communities where that is prudent based on local conditions.”

Nationwide, new COVID-19 cases per day have plunged by more than a half-million since mid-January, when they hit a peak of more than 800,000. Cases have been declining in 47 states in the past two weeks, according to data from Johns Hopkins University.

Also, the number of Americans in the hospital with COVID-19 has fallen 24% since mid-January to about 111,000. 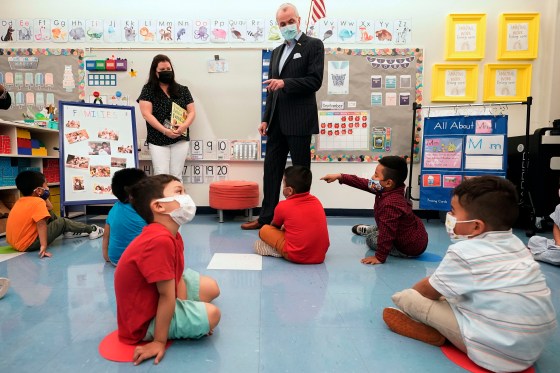 Deaths are still running high at more than 2,400 per day on average, the most since last winter, reflecting a lag between when victims become infected and when they die.

In New Jersey, it is unclear how many and how soon the state’s 600-plus school districts might end the wearing of masks.

Melissa Alfieri-Collins, a mother of two who disagrees with mask mandates in schools, saying she prefers “choice,” called the governor’s decision good news. But she raised concern that districts might keep mask rules in place.

“For this reason, parents need an opt-out option for when and if districts do this,” she said.

Stephen White, a 55-year-old father of a 14-year-old son, said that if the lifting of the mandate were to take effect immediately, he wouldn’t be in favor of it. But four weeks from now is a different story.

“By that time period, if the rates are going down and they can say that ‘OK, kids are vaccinated’ — if they have a substantial amount of kids that are vaccinated — I don’t have a problem with them not wearing a mask at school,” he said.

Francis Amegah, a 63-year-old with two children in the Newark school district, said the end of the mandate is “well overdue.”

“They shouldn’t be wearing masks. If something happens, we’ll be able to handle that. The parents should be able to take care of that,” he said.

Republicans claimed responsibility for pushing the governor to end the mandate. Murphy has said he wasn’t swayed by political pressure.

“Gov. Murphy will never admit that the pressure is getting to him, but it absolutely is,” GOP Senate Leader Steve Oroho said.