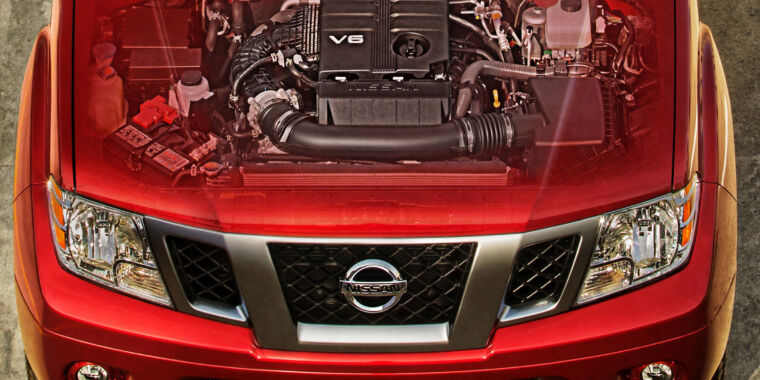 Nissan is the latest automaker to pull the plug on its internal combustion engine development. Well, mostly.

According to Nikkei Asia, the Japanese automaker has looked at the likely next set of European emissions rules and has decided it would be too expensive to design a new generation of engines that comply. Nissan is also not planning on any new internal combustion engines for Japan or China, although it will apparently keep refining existing engines and continue to work on hybrid powertrains.

However, this new policy isn’t a global one—it doesn’t apply to the US. That’s because here, the automaker expects continuing demand for internal combustion engines, particularly in pickup trucks.

That makes this at least the third caveated story about OEMs abandoning engine development in the past few months. In July 2021, Volvo announced that it was done developing new engines, instead transferring those activities to a new spin-off instead.

And in January 2022, it was reported that Hyundai was hitting the brakes on internal combustion engine R&D—something the Korean company denied.

If Nikkei Asia’s reporting is correct, Nissan is just making explicit the fact that electrification of light passenger vehicles is going to be much more rapid in regions where governments create strong policy incentives.

For example, in 2021, the European Union introduced regulations that impose massive fines on any OEM that fails to get its fleet average below 95 g CO2/km. The results have been impressive, turning Germany into the largest plug-in vehicle market after China. In the UK, EV prices have decreased for many models after the government there started reducing the threshold at which an EV qualified for a subsidy.

Meanwhile, the US has set a lackluster goal of making 50 percent of all new light vehicles electric by 2030, but without any real incentives to force OEMs to comply. And attempts to cap federal electric vehicle tax credits to more expensive EVs met their end in the US Senate, so there is little pressure on automakers to make cheaper EVs. The consequences are already clear to see, as automakers prioritize constrained battery supplies for regions like China and Europe, where the price of non-compliance is too high.