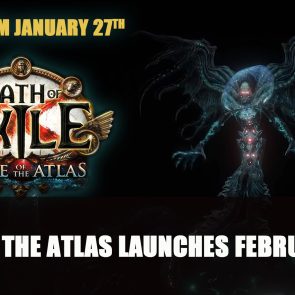 Grinding Gear Games has announced a livestream will be happening January 27th featuring the largest expansion this year for Path of Exile: Siege of the Atlas.

Path of Exile: Siege of the Atlas livestream has been set for January 27th, covering the major expansion releasing this year on February 4th. The free to play online Action-RPG will be gaining a number of new features including a new endgame system, challenge league, unique items, rewards, story quests and new pinnacle enemies. There are also game balance improvements coming with the update.

You can catch the stream live on January 27th at 11 AM PST on the Path of Exile Twitch channel.

While we only get a teaser of what’s to come in update 3.17, we’ll have to wait for the livestream to find out more details. What we do know is one mechanic from the latest expansion Scourge will not be coming forward and the Scourge Challenge League will be ending in early February according to the post on the official website. While it might not be the last you’ll see of Scourge as it “may return sometime in the future”, it will be taken out for now. So if you want to complete content from the Scourge update be sure to get that done before the update goes live.

It will be interesting to see what new mechanics will be coming in Siege of the Atlas as GGG Games has been adding a number of interesting additions to Path of Exile.

As for Path of Exile 2? So far no news update announced for the sequel of the popular ARPG, maybe we’ll get some more gameplay this year? Path of Exile 2 will bring a brand new 7 Act Campaign, upgraded graphics, a new skill gem system, new classes, skills and more. If you want the full rundown of what to expect check out our Path Of Exile 2 Gameplay Preview: Release Date, New Campaign, Classes, And More!

Path of Exile: Siege of the Atlas will be released on February 4th 2022 on PC, the game is free to play.