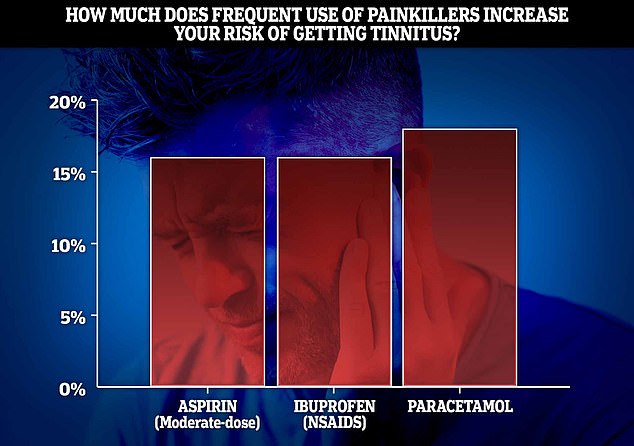 Popping painkillers such as aspirin, paracetamol and ibuprofen every day raises risk of tinnitus by up to a fifth, study warns

Regularly using over the counter painkillers could increase your risk of developing tinnitus by almost a fifth, a study suggests.

Scientists say frequent use of drugs like aspirin, paracetamol, and ibuprofen could lead to an increased of developing the common hearing problem.

Tinnitus — thought to affect one in 10 people — is a general term for hearing noises like ringing, buzzing, or hissing which are not actually caused by an outside source.

Researchers at Brigham and Women’s Hospital in Boston looked at health data from nearly 70,000 women who were recruited in their 30s and 40s and followed for two decades.

Taking a daily dose of paracetamol — called acetaminophen in the US — was linked to an 18 per cent raised risk of tinnitus.

Regular use of non-steroidal anti-inflammatory drugs, a class of painkillers which can include ibuprofen, raised the risk by around 17 per cent. And there was a 16 per cent increased risk for moderate doses of aspirin, around 100mg a day.

However, a daily dose of aspirin that was less than 100mg was not associated with any increased chance of developing tinnitus, the team said.

US scientists have found that taking over the counter painkillers once a day could increase your risk of developing tinnitus by nearly a fifth. Taking paracetamol six to seven days a week was linked 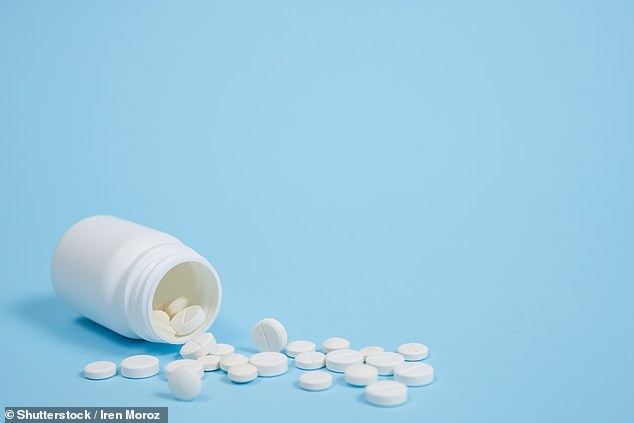 Over the counter painkillers like aspirin, paracetamol and ibuprofen are commonly taken drugs for a variety of aches and pains and are often are a key ingredient in a variety of sinus and cold/flu medications

Tinnitus is the name for hearing noises, such as ringing, buzzing or hissing, that are not caused by an outside source, according to the NHS.

It occurs due to damage to the cochlear hair cells in the inner ear, which stretch and contract in accordance with sound-induced vibrations.

Very loud noises – at a nightclub or played over headphones – can overload these cells, leaving them temporarily or permanently damages.

The damage forces other parts of the ear to overwork to compensate for the loss of function, which leads to tinnitus and eventually chronic hearing loss.

According to the charity Action On Hearing Loss, around one in 10 UK adults has tinnitus

Treatment focuses on counselling and therapies to help people find ways of coping with their condition and reducing any anxiety it causes.

Tinnitus retraining therapy uses sound therapy to retrain the brain to tune out and be less aware of ringing and buzzing noises.

While avoiding taking painkillers frequently might seem easy, the researchers warned that many people could be accidentally taking risky doses of these drugs due to the number of sinus and cold medications that contain them.

‘For anyone who is considering taking these types of medications regularly, it is advisable to consult with a health care professional to discuss the risks and benefits and to explore whether there are alternatives to using medication,’ she said.

Tinnitus is a relatively common condition and in most cases not a sign of anything serious.

It can sometimes go away on its own and in addition to some medications it can also be caused by an ear infection or another cause of hearing loss.

The latest research relied on self-reported data from the women in the study regarding both tinnitus and painkiller usage, so there are potential reliability issues in the data.

However, the authors said considering tinnitus is a condition that can only be perceived by the individual they needed to rely on self-reporting for data.

Exact dosage of the painkillers taken per day by participants was not noted in the study.

The study was also observational, meaning that the exact cause of participant’s tinnitus cannot be determined.

However previous research has indicated that painkillers can lead to damage of the inner ear and lead to hearing loss.

The researchers added that as their data observed only women, the vast majority of which were white, further work with other demographics was needed to see if the findings were replicated.

Researchers used data collected over 20 years from 69,455 women who were recruited when they were between 31 and 48 as part of a long term study into hearing.

The findings were published in the Journal of General Internal Medicine.