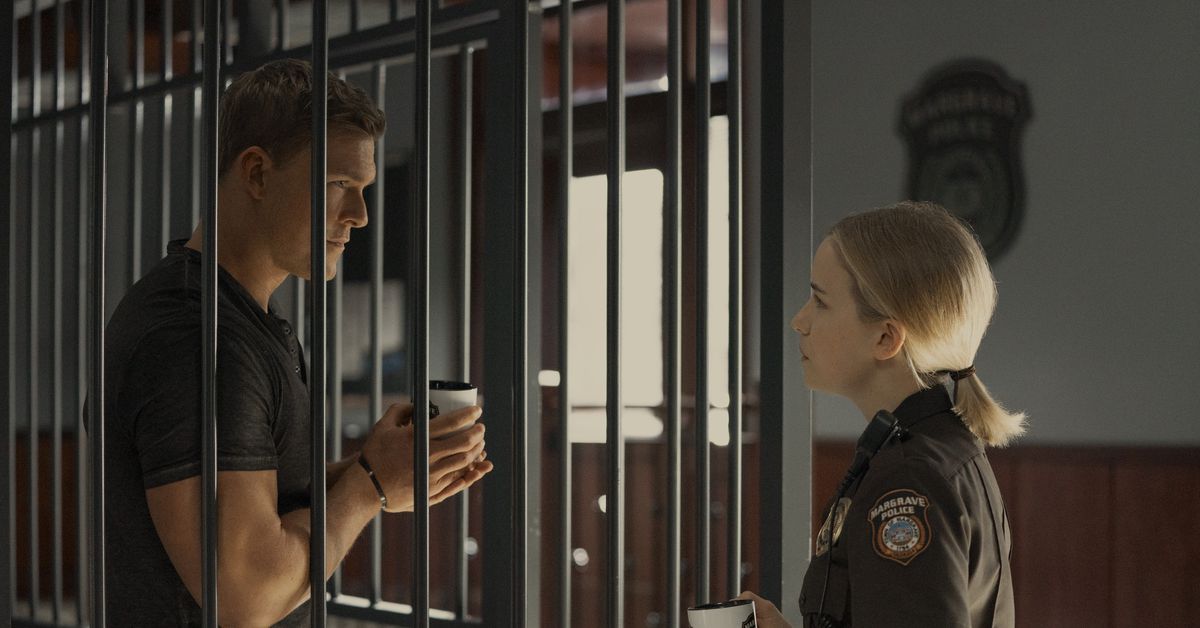 One of the chief complaints from die-hard readers about the Tom Cruise-led 2012 Jack Reacher movie was, well, Tom Cruise. While Cruise has the manic energy to bring something unique to the role, he did not even remotely physically fit the description of the 6’5”, broad-shoulder behemoth from Child’s novels, a fact Reacher-heads will never let you forget. This caused quite a stir, and Prime Video’s latest release, Reacher, is looking to correct the record.

Prime Video’s Reacher adaptation cast the absolutely massive Alan Ritchson (Titans, Blue Mountain State, the TMNT reboot) in the title role, and spends a lot of time showing you just how big and ripped he is. Frequently shot at low angles with small humans around him, you will gawk at the sheer size of the man (as many background extras do throughout the show).

So, Reacher fans, this one’s for you. Enjoy your extremely big crime-fighting lad.

Reacher is the television adaptation of Lee Child’s acclaimed thriller novel series about a former military police major who travels the States and often ends up in the middle of a dangerous situation. The first season is adapted from The Killing Floor, Child’s debut novel, and the first of more than two dozen Reacher novels. The book’s plot differs somewhat from the show, but many of the main narrative points remain, and both introduce the audience to Reacher as a soft-spoken, hard-hitting man who travels the country and often finds trouble on his way.

Reacher is developed by Nick Santora, a writer/producer who has worked on The Sopranos, Prison Break, and Law & Order, among other shows. Previous show development credits include A&E’s Breakout Kings, CBS’s Scorpion, and adaptations of Most Dangerous Game and The Fugitive for Quibi. Santora was also a co-writer on cult superhero movie Punisher: War Zone, and wrote the pilot episode of Reacher.

Lee Child is an executive producer on the show, as is Christopher McQuarrie (Jack Reacher, the Mission: Impossible franchise). And television vet M.J. Bassett (Strike Back, Ash vs. Evil Dead, the Solomon Kane movie) directs the finale.

What’s the pilot about?

Reacher arrives in the fictional small town of Margrave, Georgia via Greyhound bus, walks into a diner, orders some peach pie, and is immediately arrested for murder. Tension in the police station ensues, especially as Reacher is soon joined in his cell by a banker who has (unconvincingly) confessed to the very same murder.

Reacher starts to learn the sprawling ways this murder is connected to a larger conspiracy, in ways closer-to-home than he could have anticipated. The pilot also includes a terrific, visceral fight in a prison bathroom, as well as plenty of other bone-breaking conflicts.

A very large man who solves crimes. Particularly, one murder that sprawls out into many other crimes (including more murders) in small town in Georgia. Along with begrudging help from local police (many of whom he does not care for, and the feeling is mutual), Reacher investigates a deep-rooted conspiracy that takes him in all sorts of unexpected directions.

No, seriously, it’s about a really, really big dude solving crime. And his quest for some peach pie.

This is dadcore television at its purest; the show could accurately be described as Sherjock Swolmes. Reacher is not just some meathead who only punches his way through his problems (although he does also do that). He is also extraordinarily perceptive, translating people’s minute actions and tendencies into broader details about their lives, personalities, and histories, as well as utilizing a vast amount of knowledge from his time traveling the world. It truly is an action detective thriller, through and through.

Digging just a little bit deeper, Reacher is interested in corruption in small-town America, and the ways that can spiral up towards the highest levels of government and down to severe consequences for local residents (whether they’re involved in the scheme or not). Like many other shows about a non-law enforcement officer solving crimes, the show is also interested in the roles and limitations of laws and violence when faced with something truly sinister.

So, is Reacher good?

If “big man smart, solves crimes, breaks bones” sounds like a pulpy good time to you, you will enjoy this. Reacher is a breezy eight episodes with some great fight scenes, a clear vision of who it wants its protagonist to be, and some solid one-liners along the way. The central mystery leaves a bit to be desired (especially as more and more gets added on top towards the back-end of the season), but there’s certainly plenty to keep you going even through the lulls. If you’re wary of police-adjacent crime procedurals or grossed out by bone-breaking foley work, this may not be your cup of tea.

It’s worth talking about the cast here, since that was such a focal point for the previous adaptation. Ritchson absolutely nails the vibe from the novels; his physique goes a long way, both in the action scenes and simply walking around the town. But he’s also able to hit the “quiet guy who commands attention when he actually speaks” note. Willa Fitzgerald (Scream: The TV Series) and Malcolm Goodwin (iZombie) are both up to the task as the show’s main police officers, who are not all always on the same page as Reacher with regards to his penchant for violence. Veteran actors Bruce McGill and Currie Graham are absolutely sinister as some of the season’s antagonists, as is Chris Webster as the stomach-churning KJ. And I’d be remiss not to mention Harvey Guillén’s (What We Do In the Shadows) guest turn as an extremely overwhelmed local medical examiner who is not used to all this murder.

Bottom line: If you are a fan of the Lee Child books, you are probably going to be much happier with this adaptation than the feature-length one.

When and where can you watch Reacher?

All eight episodes of the first season are available on Amazon Prime Video.