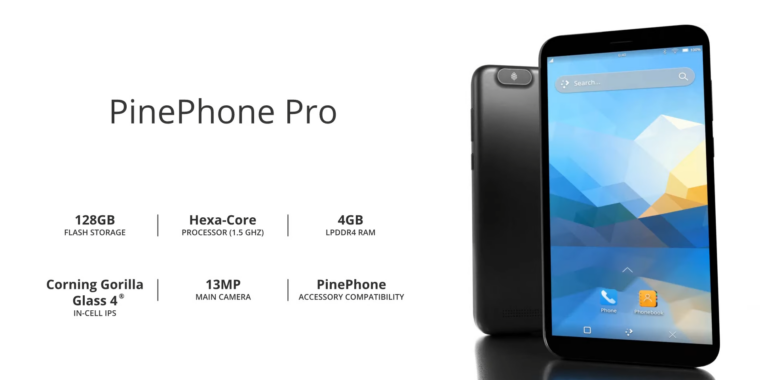 Pine64 is launching a major hardware upgrade in its quest to build a mainline Linux smartphone. After the launch of the original PinePhone in 2019, the organization is now taking preorders for the PinePhone Pro, a new smartphone it’s calling “the fastest mainline Linux smartphone on the market.” The phone was announced in October, but now you can secure a unit yourself. The MSRP is $599, but it’s up for preorder now at an introductory price of $399.

Since Pine64 wants to make an open source Linux smartphone, its choice of hardware components are limited. Most big chip companies like Qualcomm or Samsung don’t want to share open drivers or schematics, and you saw that with the original PinePhone, which was based around a 40 nm Cortex A53 SoC made by Allwinner. The PinePhone Pro is upgrading things with a Rockchip RK3399 SoC. This sports two Cortex A72 CPUs and four Cortex A53 CPUs, and Pine64 says it worked with Rockchip to get the chip “binned and voltage locked for optimal performance with sustainable power and thermal limits.” Pine64 doesn’t list a process node, but other companies list the RK3399 at 28 nm. If that’s true and you’re looking for something roughly comparable in Qualcomm’s lineup, the Snapdragon 618/650 (a mid-range chip from 2016) would seem to fit the bill.

The phone has a 6-inch, 1440×720 LCD, 4GB of RAM, 128GB of eMMC storage, and a 3,000 mAh battery. There’s a USB-C port with 15 W charging, a headphone jack, a 13MP main camera, and a 8MP front camera. The back cover pops off, and inside the phone you’ll find a removable battery (whoa!), MicroSD slot, pogo pins, and a series of privacy dip switches that let you kill the modem, Wi-Fi/Bluetooth, microphone, rear camera, front camera, and headphones.

The pogo pins support a variety of attachable backs, which are compatible with both the original PinePhone and the PinePhone Pro. For instance, there’s no built-in biometrics, but Pine64 sells a $25 back panel with a capacitive fingerprint reader. There is no wireless charging, but you can get a back panel that adds that for $10. The wildest option is a $50 keyboard case with 6,000 mAh battery. This turns the phone into a mini-laptop with individual plastic keycaps that look like they have more travel than many laptop keyboards.  The big downside to this replaceable back strategy is that you have to pick between these options. You can’t have wireless charging and a fingerprint reader, for instance.

As for the software you’ll be running on this thing, that’s kind of up to you. This is a phone for the Linux enthusiast that is willing to deal with some rough edges. It ships with Manjaro Arm and the Plasma Mobile interface, which Pine64 calls “pre-beta.” You really can’t be any more honest than the “Who is it for?” disclaimer on the main PinePhone Pro page:

Contemporary mobile Linux operating systems have a way to go before they can be considered true alternatives to Android or iOS. While mobile Linux isn’t in a state that could satisfy most mainstream electronics consumers, we recognize that a sizable portion of our community is ready to make the jump to a Linux-only smartphone today. The PinePhone Pro has the raw horsepower to be your daily driver, granted you’re ready to accept the current software limitations.

Pine64 says it will keep making the original PinePhone, which is still available for the dirt-cheap price of $150. The Pro model starts shipping January 24.