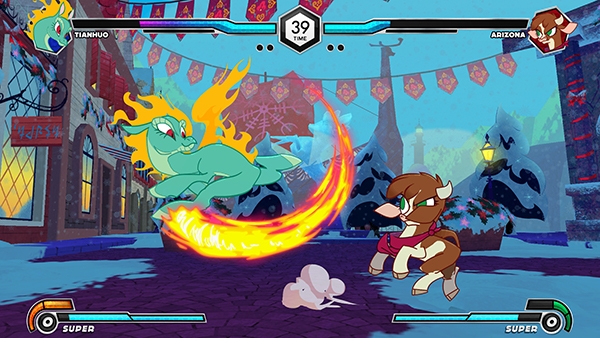 But if you’d care to to go back up the ownership ladder for a moment, you might recall that Modus Games’ parent company Maximum Games was recently acquired by Zordix Game Group. So Zordix owns Maximum, which owns Modus Games, which is absorbing Mane6 into Modus Studios.

And Mane6 of course, is responsible for what has turned out to be a notable niche fighting game that’s turned heads during the course of its development. The game was originally in the works under the title Fighting is Magic, a sly nod to the cartoon My Little Pony: Friendship is Magic, which gained unexpected (and unintended) popularity with a much older internet audience around 2010.

This turned south for the indie dev team when Hasbro sent them a cease & desist letter over the name. But they got a second chance when Friendship is Magic creator Lauren Faust stepped in to design original characters for their renamed game.

One Indiegogo campaign later, and Mane6 was off to the races.

Though the game is officially out on Steam, development has continued on the project as the team works to add new characters and other updates. It’s interesting that the game’s original team managed to stick it out so long as independent developers, and that they’ve now opted for acquisition to keep the game alive.