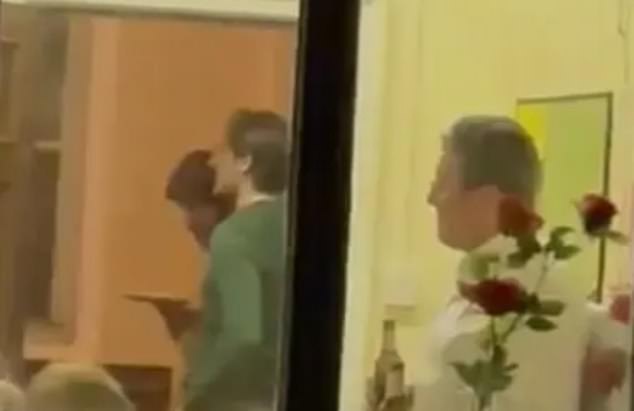 Sir Keir Starmer was last night under mounting pressure to apologise after being pictured drinking with colleagues during lockdown.

The Labour leader has tried to ride out the controversy but was forced on to the defensive yesterday as Tory MPs accused him of hypocrisy.

In an uncomfortable TV interview, Sir Keir said there was ‘no comparison’ between his drinking and the Prime Minister’s attendance at an event in the Downing Street garden.

The footage of Sir Keir – taken on April 30, 2021 – showed the Labour leader with a bottle in one hand

But he could not say why it was fine for him to drink in a Labour office during a time when indoor socialising was banned, after spending last week castigating Boris Johnson over the outdoor gathering, which the PM has said he thought was a ‘work event’.

He said: ‘Instead of trying to weasel his way out of this, accusing the Prime Minister of making hopeless excuses, it now appears he is in the same boat. 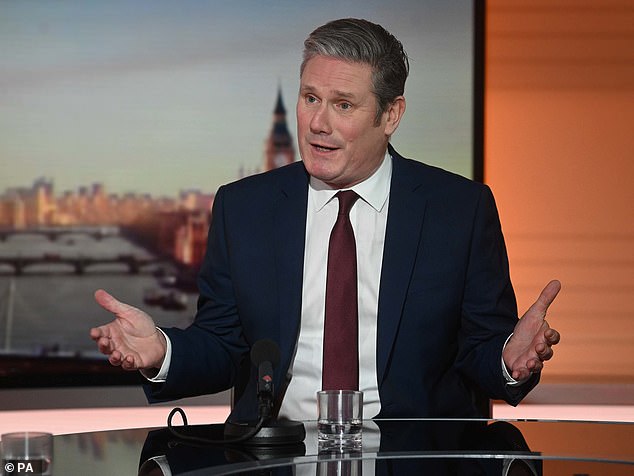 ‘It is now for Keir Starmer to ‘man up’ and show he is prepared to apologise.’

Michael Fabricant added: ‘If the Prime Minister can apologise for a secure Downing Street garden event where nobody could have joined in from outside, it is a bit graceless of Keir Starmer not to profusely apologise for an event in an office that was not guarded and could have been a real Covid spreader.

‘While what happened in Downing Street was not a good look, it was far safer from a Covid point of view than Keir Starmer’s party.’ 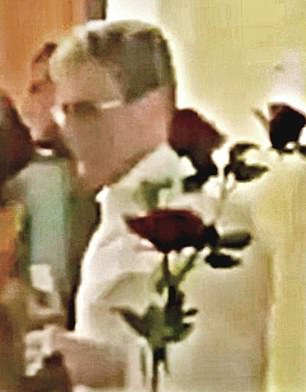 Tory backbencher Andrew Bridgen, who has called for the Prime Minister to go over recent scandals, said of Sir Keir: ‘People in glass houses shouldn’t throw too many stones.

‘People can judge for themselves whether or not he broke the rules.’

He is pictured chatting with a woman – believed to be fellow Labour MP Mary Foy – in her constituency office in Durham.

At least five people appeared to be inside the room.

A friend of the PM said: ‘Boris has apologised, so why won’t Starmer? He has called for the PM to resign, which is a very big statement from the Leader of the Opposition, especially one who is a lawyer.

‘But what’s the difference between what he did and what Boris did?’

A spokesman for the Labour leader said there was nothing for him to apologise for, as he had broken no rules. She added: ‘Keir follows the rules at all times. He’s a former Chief Prosecutor – honesty and decency are non-negotiable for him.’ 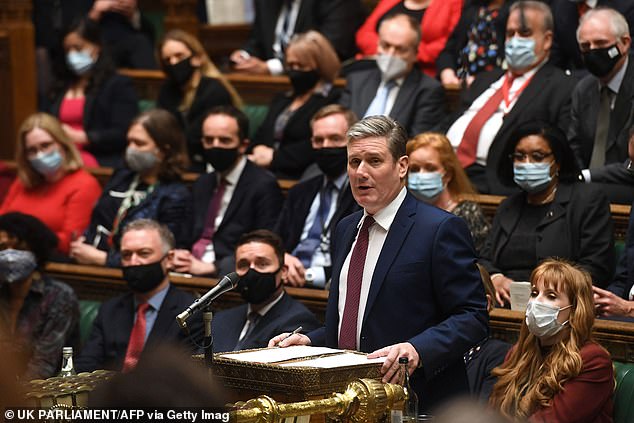 Sir Keir Starmer, pictured, was last night under mounting pressure to apologise after being pictured drinking with colleagues during lockdown

On the BBC’s Sunday Morning show, the Labour leader insisted he had not broken any rules, despite being pictured mixing indoors last April, when this was banned under ‘step two’ restrictions.

He said it was fine for him to drink with others because it was a work meeting in the run-up to last year’s local elections.

Asked if he had broken Covid rules, Sir Keir said: ‘No, I haven’t. I was in a constituency office just days before the election. We were very busy, we were working in the office and we stopped for something to eat.

‘And then we carried on working. That is the long and the short of it. No party, no breach of the rules and absolutely no comparison with the Prime Minister.’

Asked by presenter Sophie Raworth whether the drinking of beer was ‘reasonably necessary for work purposes’, the Labour leader said: ‘We’d stopped to eat a takeaway whilst we were working in the office and then we carried on.’

Asked why the photograph of Mr Johnson attending a work event with wine and cheese in the Downing Street garden in May 2020 was different, he said: ‘People will look at the photos and make their own minds up.’

Miss Raworth then asked him how to draw the line now that he had said drinking was within the guidelines.

Dodging the question, he replied: ‘The line is drawn in the rules and the Prime Minister broke the rules. The [Prime Minister’s] party happened because an invitation was sent to a hundred people saying, “let’s have some socially distanced drinks in the garden and bring your own booze”. There is simply no comparison.’

Mr Johnson admitted attending a work event at Downing Street during the first lockdown, and apologised in the Commons last week.