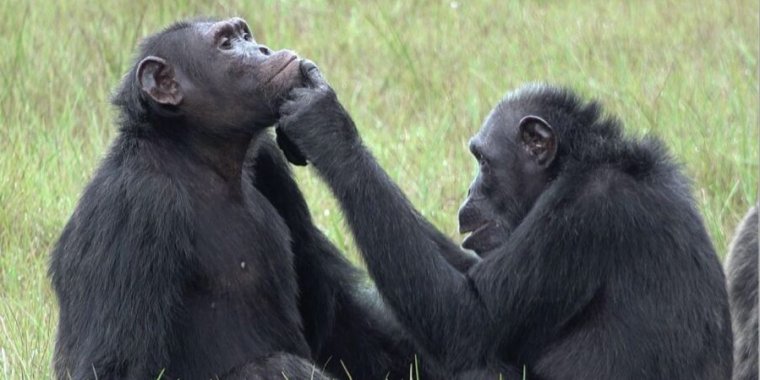 In November 2019, Alessandra Mascaro was observing a community of chimpanzees in the Loango National Park in Gabon as part of her volunteer service with the Ozouga Chimpanzee Project when she noticed some unusual behavior. A chimp named Suzee was inspecting a wound on the foot of her son, Sia. Suzee suddenly caught an insect from a nearby leaf, put it into her mouth for a moment, and then pressed it to Sia’s wound.

Mascaro caught the unusual interaction on video and forwarded it to two scientists on the project: Tobias Deschner, a primatologist with the Ozouga Chimpanzee Project, and Simone Pika, a cognitive biologist at Osnabrück University. The researchers thought the interaction could be suggestive of prosocial behavior among chimpanzees and the capacity for empathy—a question of heated debate in the field—and they spent the next 15 months looking for other examples of this type of wound-treating behavior. All told, they recorded 76 such instances and reported their findings in a new correspondence published in the journal Current Biology.

There are between 42 and 45 chimps in the Loango National Park community. According to the authors, the males are much more prone to open wounds than females (with a ratio of 63:13) since they tend to have more aggressive interactions. The wound-treating incidents (both self-applied and applying insects to the wounds of others) were filmed whenever possible, and that footage was transcribed into detailed written reports. In some cases, there was no video footage, so the researchers wrote a detailed report the same day it occurred.

Non-human primates have been known to self-medicate, according to the authors, usually by ingesting plants or other matter that can control intestinal parasites. And there have been a few recent reports of primates applying leaves or other materials (including arthropods) to their own wounds. The self-application of insects to a chimp’s wound was also observed in this new study. For instance, on November 26, 2019, an adult male named Freddy was filmed grabbing an unidentified insect from a nearby leaf and holding it between his lips. He then removed the insect with his thumb and index finger and applied it to a wound on his left arm, pressing down and gently moving the insect back and forth.

Littlegrey had another flesh wound on January 29, 2021, on his right thumb. Another male chimp named Arnold had been grooming Littlegrey’s arm and noticed the wound. Arnold then grabbed an insect from under a nearby leaf, put it into his mouth briefly, and then applied the insect to the wound, using the same gentle rubbing motion.

“This is, for me, especially breathtaking because so many people doubt prosocial abilities in other animals,” said co-author Pika. “Suddenly we have a species where we really see individuals caring for others.”

Future research will focus on identifying the specific kinds of insects the chimps are using to treat open wounds to see what medicinal benefits might be gained. It’s possible that the insects can provide pain relief, and Pika notes that humans have been known to use insects as remedies because they may have antibiotic or antiviral functions.