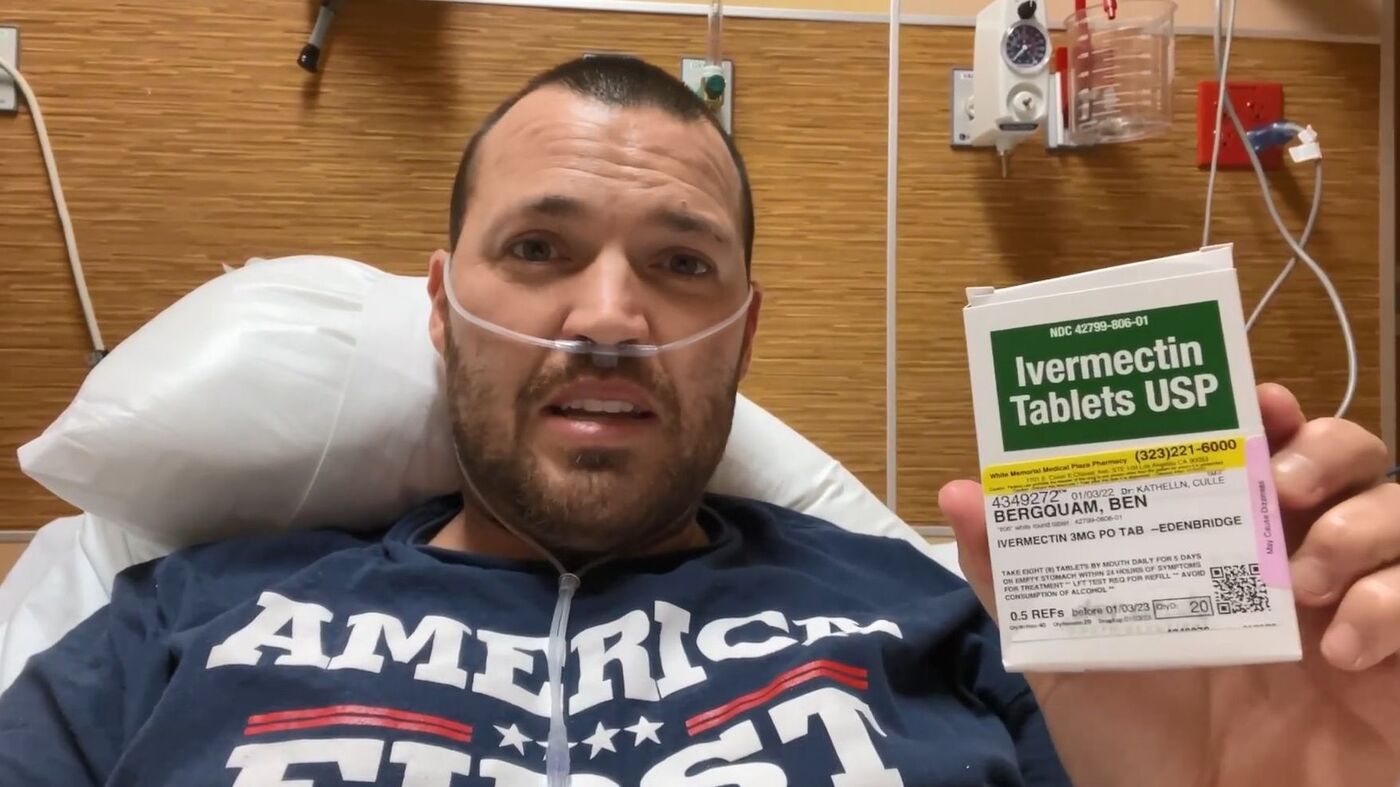 Ben Bergquam was hospitalized with COVID in January. He says he brought his own prescription for ivermectin–an unproven COVID therapy.

Ben Bergquam was hospitalized with COVID in January. He says he brought his own prescription for ivermectin–an unproven COVID therapy.

“My Christmas gift was losing my [sense of] taste and smell and having a 105 degree fever, and just feeling like garbage,” Bergquam said in a Facebook video that he shot as he lay in a California hospital.

Bergquam told his audience he wasn’t vaccinated, despite having had childhood asthma, a potentially dangerous underlying condition. Instead, he held up a bottle of the drug ivermectin. Almost all doctors do not recommend taking ivermectin for COVID, but many individuals on the political right believe that it works.

The details revealed in Bergquam’s video provide a rare view into the prescription of an unproven COVID-19 therapy. Data shows that prescriptions for drugs like ivermectin have surged in the pandemic, but patient-doctor confidentiality often obscures exactly who is handing out the drugs.

Bergquam’s testimonial provides new and troubling details about a small group of physicians who are willing to eschew the best COVID-19 treatments and provide alternative therapies made popular by disinformation — for a price.

Ivermectin is usually prescribed to treat parasitic worms, and best medical evidence to date shows that it doesn’t work against COVID-19. The Food and Drug Administration, National Institutes of Health, American Medical Association and two pharmaceutical societies all discourage prescribing ivermectin for COVID-19, and many doctors and hospitals will not give it to patients who are seeking treatment.

But fueled by conspiracy theories about vaccine safety and alternative treatments, many on the political right incorrectly believe ivermectin is a secret cure-all for COVID. As millions of Americans fell ill with COVID last summer, the Centers for Disease Control and Prevention reported ivermectin prescriptions were at 24 times pre-pandemic levels. The agency says prescriptions again rose during the latest omicron surge.

A significant number of these prescriptions come from a small minority of doctors who are willing to write them, often using telemedicine to do so, according to Kolina Koltai, a misinformation researcher at the University of Washington. The same doctors frequently promote anti-vaccine conspiracy theories.

“They’re profiting off misinformation, using their medical expertise as currency,” she says.

A look into the world of unproven COVID treatments

Bergquam told his audience he got his ivermectin from a group known as America’s Frontline Doctors. Their leader, Doctor Simone Gold, is currently facing multiple charges related to her role in the insurrection at the Capitol on January 6, 2021. She is well known for spreading anti-vaccine propaganda, and she also tells audiences across the country to give her a call for prescriptions of unproven drugs like ivermectin. Her group charges $90 for the call, and Koltai believes the prescriptions are among its primary sources of income.

“I would reckon that telehealth and telemedicine is one of the major income-generating streams for America’s Frontline Doctors,” she says.

Last year, online publication The Intercept published a story based on hacked documents, which showed the group was potentially making millions by selling thousands of prescriptions (Gold denies that story in public speeches, saying that the hack did not in fact occur).

In his video Bergquam thanked the frontline doctors repeatedly for prescribing him ivermectin. In doing so, he revealed the name of the licensed doctor writing the prescription: Kathleen Ann Cullen.

Cullen, 54, is based out of Florida and has a troubling history of medical practice. She spent most of last year under investigation by the State of Alabama, which eventually revoked her medical license in November, two months before Berquam entered the hospital. The cause was her involvement in a separate telemedicine company, according to E. Wilson Hunter, general counsel at the Alabama Board of Medical Examiners.

“She was working with a telemedicine company and was utilizing her medical license to further their ability to generate billable events, without actually providing healthcare to the patients,” he says.

In other words, Cullen was ordering a battery of expensive genetic tests remotely, without ever seeing or even speaking to the patients she was testing. It was so bad, Hunter says, that she was ordering prostate cancer screenings for female patients, who do not have prostates.

The company Dr. Cullen was working for at the time was called Bronson Medical LLC. It no longer has a functioning website, and its owner pleaded guilty in 2020 to federal healthcare fraud charges.

When the Alabama board confronted Cullen, she failed to produce the patient records.

“At the hearing she knew nothing, saw nothing, heard nothing, understood nothing and did not take responsibility for her actions,” Wilson says.

These are not the only blemishes on her record. Cullen’s medical license in Kansas was suspended for failure to pay fees. And her American Board of Internal Medicine certification has lapsed (the board declined to say when the lapse occurred).

Despite these problems, Cullen still has active medical licenses in North Carolina and Florida. It appears she is now using those medical licenses to prescribe ivermectin on behalf of America’s Frontline Doctors.

In January, thousands of protesters gathered in Washington for a rally against vaccine mandates. Many believe in alternative therapies like ivermectin.

In January, thousands of protesters gathered in Washington for a rally against vaccine mandates. Many believe in alternative therapies like ivermectin.

“Where’s the accountability in all of that?,” says Ashley Bartholomew, a nurse who’s with the organization No License For Disinformation, a group of medical professionals who are trying to force medical boards to take action in cases like these.

Bartholomew was the first to notice Cullen’s name on the bottle. She said the entire video made her nervous, because Ben Bergquam appeared to be bringing in his own outside medication to a hospital setting:

“Is the nurse aware he’s also taking these prescribed medications from this doctor in Florida while he’s a hospitalized patient? And is his team of doctors aware? And is the pharmacy aware?” she asks.

Even if they were, she worries the video — which has 23,000 views on Facebook — will encourage others to bring in outside meds, increasing their risk for complications.

NPR contacted Bergquam, Cullen and America’s Frontline Doctors, and none provided comment for this article.

As for the states where she still holds a license, public records show the Florida Department of Health has filed two administrative complaints, but her licence is listed as clear and active on their website. They did not respond to repeated requests for comment. The North Carolina Medical Board meanwhile would not confirm whether an investigation was underway, but Brian Blankenship, the board’s deputy general counsel, says that investigations take time: “State Agencies have to give people due process rights based on evidence,” he says.

“How many patients have to suffer?”

Cullen’s case is somewhat unusual. The Federation of State Medical Boards says its data show that 94% of doctors have licenses in just one or two states. The federation runs a database that helps notify states when disciplinary action is taken.

“Within a day after cataloging and categorizing the disciplinary order, we’ll share with other states and territories,” says Humayun Chaudhry, the federation’s president.

But often states must conduct their own, sometimes lengthy investigations. To streamline that process, Chaudhry says that his organization is also encouraging states to adopt a new “Interstate Medical Licensure Compact,” that when signed into law allows states to see when investigations are started against a physician, although only for physicians who seek licensure through the compact.

For Ashley Bartholomew, the nurse fighting disinformation, this case shows just how broken America’s medical licensing apparatus is. Cullen has already lost her license for poor telehealth practices, and yet a tangle of state medical boards, laws, and procedures continues to allow her to write prescriptions for questionable treatments.

“How many patients have to suffer from disinformation,” Bartholomew asks, “until we actually have action?”